In “Rump: The True Story of Rumpelstiltskin” (Knopf 2013), Liesl Shurtliff retells the story that the Brothers Grimm collected in Germany and first published in 1812. In Shurtliff’s story Rump is not an 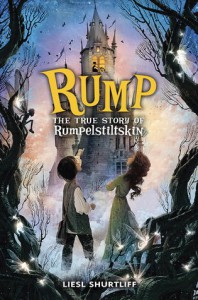 imp, but a smallish boy.

Why in the past did they think he was an imp? Rump mistakenly steps on a pixie nest and they retaliate by biting his face, arms, legs, and yes, his rump. The painful bites swell and disfigure the boy, so he probably looked like an imp. Temporarily.

But back to the beginning. After whispering the name of her newborn in his ear, his mother dies. He can only remember “Rump.” In his world, his name is his destiny. The naming of babies is so important that people name nothing else. They live in the Village at the base of the Mountain in the Kingdom. The animals don’t even have names, but Rump identifies his goat as Milk and his donkey as Nothing. His mother came from Yonder or maybe Beyond. With a name like Rump, of course he’s teased relentlessly.

The Mountain was once full of gold and it is the villagers’ unfortunate task to mine what little remains and pay it as a tax to the greedy Miller who in turn hands it over to the gold-loving King. As is true in the Grimm version, the Miller tells the King that his daughter can spin straw into gold. Great. The greedy king takes the miller’s daughter as his bride. Now what? They need Rump who can spin straw to gold. What a heartless clever Miller!

In this romp with Rump, Shurtliff offers some sly turns of wisdom. The sludge-slurping trolls are known to eat human flesh. Not true, but the trolls keep humans at bay by letting them think this because, one says, “Humans take one look at any living creature and think only how they can use it.”

There’s more fun to be had. Gnomes pop out of holes in the road, take messages, and deliver them to individuals throughout the Kingdom. What a great way to send and receive messages.

As for the pixies, usually Rump is just swatting them away like we might swat at insects. But unlike most insects, pixies have garish colored hair and spectacular wings. The pixies are attracted to Rump because they love gold and they sense that Rump has a way with straw (in that he can spin it into gold) long before Rump knows of his talents.

Rump must discover his full name—and with it, his destiny. Afterall, You are what you’re named. Rump? No, there must be more to this guileless self-deprecating boy. And why ever would he want the new queen’s firstborn? Shurtliff explains it all in her clever retelling of “Rumpelstiltskin.”