At the Massachusetts School for the Feebleminded, we become acquainted with four remarkable young women in the historical fiction, “The Degenerates” 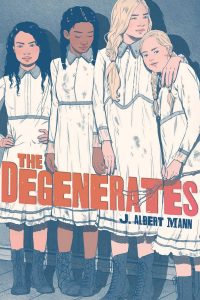 (Simon & Schuster 2020) by J. Albert Mann. Alice, who rarely speaks, is African American, has a clubfoot—a special talent of intuiting relationships between people. Maxine is a dreamer who protects her younger sister, Rose, who has Downs Syndrome and is termed “Mongoloid.” London is pregnant, and of Italian descent—but called “dago.” She curses like a yeoman and is wild, even crass, and yet lovable. Alice, Maxine, and London are fourteen, and Rose is a year younger in this story set in the early part of the twentieth century.

London is beaten by police and brought by wagon to the “School” and put in solitary confinement. She finds that three meals a day and the “pissed on” mattress are acceptable, but the confinement is unbearable. In time, once she’s released from the dungeon into the main school, a generous attendant gives her a book—“The Count of Monte Cristo” by Alexandre Dumas.

The others marvel at London’s ability to read. Rather than reading in this “school,” they’re trained to launder clothes, mop up excrement or take care of dying infants in the baby’s wing. London and Rose build an unlikely friendship likened to a “stevedore” and an “angel” while Maxine and Alice hold each other up with the help of very few words. Bullies in the school provide ever-present danger. Alice must be especially careful because her punishment would be so much worse than that of the white girls.

The staff describes the inmates as “tainted”; they’re diagnosed as “imbeciles,” “morons,” “idiots,” and “cripples”—terms that the author, in her endnote, reports have been taken directly from the historic writings of the doctors. As readers, we’re aghast at the injustice, but even more powerful, we fall in love with the four girls.

The author writes, “Anger wrapped itself around London’s heart like a cold fist and squeezed. She didn’t want help. She didn’t want kindness. Life was crap and she liked it that way. It was easier.” But loving sweet Rose makes her see life differently. And Rose has a plan. Maybe there was hope.

Maxine and Rose were sent to the “School” when their mother found it difficult to care for them at the same time as her many boys. Maxine expects her mother to fetch them home so she and Rose could help care for their younger brothers. But their mother never does come and Maxine knows it’s for her transgression—which remains a mystery to us until deep into the story. Alice has been here since she was seven years old when her brother dropped her off.

In spite of their bleak, violent, racist world, the girls experience deep humanity amongst themselves. They draw strength, inspiration and support from one another. We see that most of the inmates have been put away simply because they are inconvenient to their families. Maybe just maybe some of them will escape and find a way to live outside.

Patricia Hruby Powell is the author of the award-winning Josephine; Loving vs Virginia; and Struttin’ With Some Barbecue;Lift As You Climb releases June 9, 2020.  She teaches community classes at Parkland College.         talesforallages.com