“No Shelter Here: Making the World a Kinder Place for Dogs ” by biologist Rob Laidlaw (2012) is 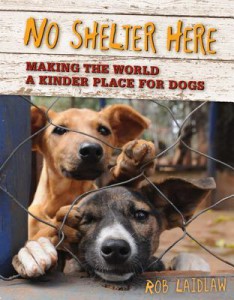 not your average dog book. It is more an inspiration to help dogs that need you, by becoming what Laidlaw aptly calls a “dog champion.”

Dogs have super senses, starting with their amazing sense of smell, from which dogs attain so much information. Who passed this corner? When? Our various dogs sniff their way along the sidewalk to the park, totally engrossed in their research.

Laidlaw tells us, dogs are highly social and should not be kept alone for any length of time. They’re wonderful companions and family members. They need playtime and a comfortable home. They should not live chained outside. They need good food and fresh water.

It’s best to get your dog from a shelter or from a rescue operation because when you adopt a dog you’re saving a life. If you buy your dog from a pet store, the chances are the dog came from a puppy mill.

Puppy mills are money-making ventures that produce as many puppies as cheaply as possible at the expense of the animals’ comfort. Dogs live isolated, in crates, might not be fed the best food, or kept clean or get proper medical attention. They don’t get loving attention.

Even if you can’t have a dog, you can still hang out with them.

Mobile Mutts is a fantastic locally based dog rescue operation. That’s where I got one of our two rescue dogs. Volunteers transport dogs from southern states where there tends to be less municipal money and more high-kill shelters to the far north where there are no-kill shelters. Our Tree Walker Hound, Lil, was found in a field in Kentucky, put in a shelter and scheduled for euthanasia when she was put on the Underdog Railroad. I mean, Mobile Mutts. And, yep, we got her.

Many dogs need adopting—dogs who live on the streets, retired greyhound racers, beagles used in science experiments, dogs in shelters.

As a “dog champion” you might inform classmates about puppy mill conditions, write letters to congressmen about the plight of puppy mill dogs, volunteer at the Humane Society, overnight dogs for Mobile Mutts, make a documentary film.

As Laidlaw says, “Anyone can be a dog champion. Just make a commitment to help and then get going.” Dogs everywhere are counting on you. 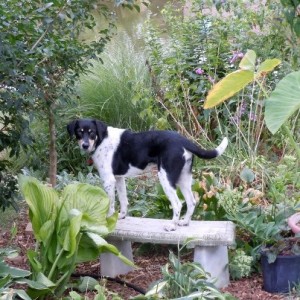 So here’s Lil, who came up on Mobile Mutt’s transport, June 2, 2012. I over-nighted her and fell totally head-over-heels in love. She looked like a xylophone, all ribs showing, weighing in at 40 pounds. She was meek, glued to my side, not in need of a leash when outside. She wasn’t going anywhere.

Besides her dog food, I fed her while I was cutting veggies for dinner. She ate cauliflower, broccoli,  tomatoes, carrot, everything I offered her.

So it was about then that I called my traveling husband, Morgan, to say I’d fallen in love, and had–HAD–to adopt this Tree Walker Hound. What could he say?

I asked Marion Stevens who is the fantastic base camp operator for Mobile Mutts in Champaign, if I could adopt my xylophone girl. She said I’d have to put my girl back on the transport, that is send her up  to Redemption Rescue in Minnesota. They OWNED her, and she might already be spoken for. Clearly

this was the Underdog Railroad. Follow the northern star and all that.

So, I sent my girl off to the next leg of her journey, to Kankakee, weeping. But that’s not unusual. We “over-nighters” all seem to fall for our overnight charges. Marion said she was working on my plea, trying to get in touch with the people at Redemption Rescue in Minnesota. I went back to bed, still crying, with my phone tucked under my pillow.

And in about an hour or so, Marion called to say, the Tree Walker Hound was mine, and to meet her at the drop off point (St. Thomas Moore H.S. parking lot)  in about another two hours. So Marion brought her back to me from Kankakee. My xylophone doggy and I lay in the grass together, just loving each other.

It so happened that my husband Morgan was on his way home from Texas with Shanti, who had been part of a family of three adults and three dogs and now everyone was dispersing. A week prior, we’d agreed to take Shanti. So now we had two rescued dogs–an unplanned Parenthood– life was about to change.

That first night we were all together, we named xylophone girl, Lil–after Lil Hardin Armstrong–Louis Armstrong’s wife and jazz pianist. The second day, Lil gained some confidence, the third day, more. And not on a leash, she chased the ducks through and around the lake. Next day, she bolted again, so now we use a leash.

The first three weeks were a bit stressful, but also magnificent. And now it’s all magnificent. We’re a family of four. We go to the dog park twice each day–sometimes three times–and take walks in the neighborhood at night. Lil has gained 6 pounds, looks terrific. Shanti has lost 4 pounds, which has improved her health and svelte beauty. And as a matter of fact, we’ve lost weight, too. All those walks.

No way will Lil eat cauliflower or broccoli now. Clearly she’d been eating anything and everything when she was on her own and I realized that on that first night together, if I thought carrots were worth eating, then so did she. But Lil has a mind of her own now. Both Lil and Shanti are the most affectionate girls I know.

Let me recommend that you become a “dog champion.”

Patricia Hruby Powell (www.talesforallages.com) is a nationally touring speaker, dancer, storyteller, librarian and children’s book author. Her book, Joséphine: The Dazzling Life of Josephine Baker (Chronicle Books) will come out January 2014. Her book about Lil Hardin Armstrong, Struttin’ With Some Barbecue, is still seeking a publisher.