Rowan Chase, 17, the daughter of a white oil magnate father and a black lawyer 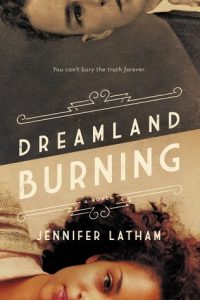 mother finds a skeleton under the floorboards in the “back house” of her spiffy Greenwood area Tulsa home in “Dreamland Burning” (Little Brown 2017) by Tulsa resident Jennifer Latham.

Will Tillman, 17, son of a white shop-owner and full-blooded Osage Indian mother, is in love with Addie, the prettiest girl at school, in 1921 Tulsa. Sincere and ignorant Will sees Addie at a speakeasy with a handsome young black man. It’s Prohibition, which doesn’t stop anyone from drinking, and Will is stumbling drunk. His manly pride injured, Will goes racist haywire on the black man, Clarence. In defense, Clarence pushes Will who falls and breaks his wrist. Bad news in segregated Tulsa.

In 1921, Greenwood was the wealthiest black neighborhood in the nation. If you know your race riot history, you know Memorial Day weekend began the worst race riot of the nation, when white people burned 35 blocks of black Greenwood. An estimated 300 people were killed. And it was all hushed up for decades. That’s the background story.

Alternating voices take us back to Rowan who slips a mildewed wallet from a scrap of pocket off the skeleton before her mother calls the police. The police aren’t real concerned about a hundred year old murder case, but Rowan is.

1920s Will is white enough to attend the white school, but his detractors call him “half-breed.” His Osage mother has oil rights to Maple Ridge plus she’s inherited 2 other portions. She’s rich. But racism against Indians requires her to have a white sponsor to hold her monies. That would be Will’s father, who is building a luxury house for the family on the edge of Greenwood.

Rowan and Will are both complex and well-drawn characters. Privileged and snarky Rowan describes a nearby high-end shopping mall “where the flowerbeds are perfect and the luxury cars roam free.” Her summer job is at a free clinic, and she loves the job.

Under the influence of his friend Clete, Will has falsely accused Clarence of assaulting him. Clarence is beaten by a white mob that plans to lynch him. Will isn’t bad, but he’s young and weak, until he begins to grow up.

Due to the parallel stories we can view racism—the degree of hatred allotted to varying complexions—then and now. Rowan’s mother says, “Black men and women are dying today for the same reasons they did in 1921. And we have to call that out . . .”

Rowan and best friend James are trying to solve the aged mystery with the contents of the skeleton’s wallet and it’s not pretty. Because we, the reader, have Will’s story, we’re a little ahead of Rowan, but not much. Latham has ingeniously structured her story to be a page-turner—every single page.

Readers follow two teens coming of age, making moral decisions and discovering their own values, while being steeped in the deep waters of history.