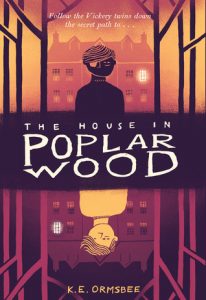 Ormsbee. The book opens with, “The last day of October was creeping into Poplar House. It came through fissures in the gables and mite-sized holes in the floorboards, bringing with it the scent of burnt oak branches.” If you guess that you’re entering an alternate universe—a spooky one, you’d be correct.

The boys live in the same house—but not together. On one side, Felix lives with his father, the town doctor. Father and son serve Death. Felix’s job as apprentice-in-training is to brew herb broths such as rose petals and nightshade as an antidote to flu. On his sixteenth birthday Felix will sign the contract to be Death’s apprentice. Felix may not go to school. In fact no one in town knows he exists.

On the other side of the house Lee lives with his mother, the town psychologist, and they serve Memory. As apprentice-in-training, Lee bottles memories of the townspeople. The bad memories are labeled Forget and the good ones Remember. Lee does go to school and whereas the boys’ mother and father cannot see each other, the boys are close and hang out daily.

Felix is blind in one eye—but this eye sees Death, tall and elegant in a black suit and top hat. Lee is deaf in one ear—the ear that hears Memory. Overall, Lee has a much gentler life than Felix who confronts Death frequently, whenever Death takes the soul of a patient—or when he punishes Felix for some wrongdoing. Both boys want a united family. But the “Agreement” denies them that.

A teenage girl, Essie Hastings, has just died in an accident by falling off Boone Ridge and into the gully. Gretchen Whipple, the second child of the town’s mayor, overhears her father discussing the matter and realizes this was no accident. Gretchen is a go-getter kind of gal and she’s going to get to the bottom of this. Gretchen’s father, the mayor is the town’s Summoner, and his job is to take care of the townspeople. But is he doing his job?

Gretchen isn’t even in line to be the next Summoner. Her rough-edged brother, Asa, as firstborn, gets the job. This irks Gretchen. She knows she can cast a spell, if they’d only teach her. The determined girl goes to Poplar House to see her classmate Lee and discovers the little-known Felix. After some ups and downs the three become allies, if not friends. Gretchen wants to know what happened to Essie Hastings and the twins want to break the Agreement, if possible.

Oh yeah, Death and Memory are Shades and so is Passion. It was Passion who got the boys’ parents together in the first place—and is probably responsible for the divided house.

I’m not normally drawn to fantastical stories, but this is so wonderfully spooky and so well written. Highly recommended.