By the author of the bestselling novel The Hate U Give (Balzer & Bray 2017), Angie Thomas, comes a prequel, Concrete Rose 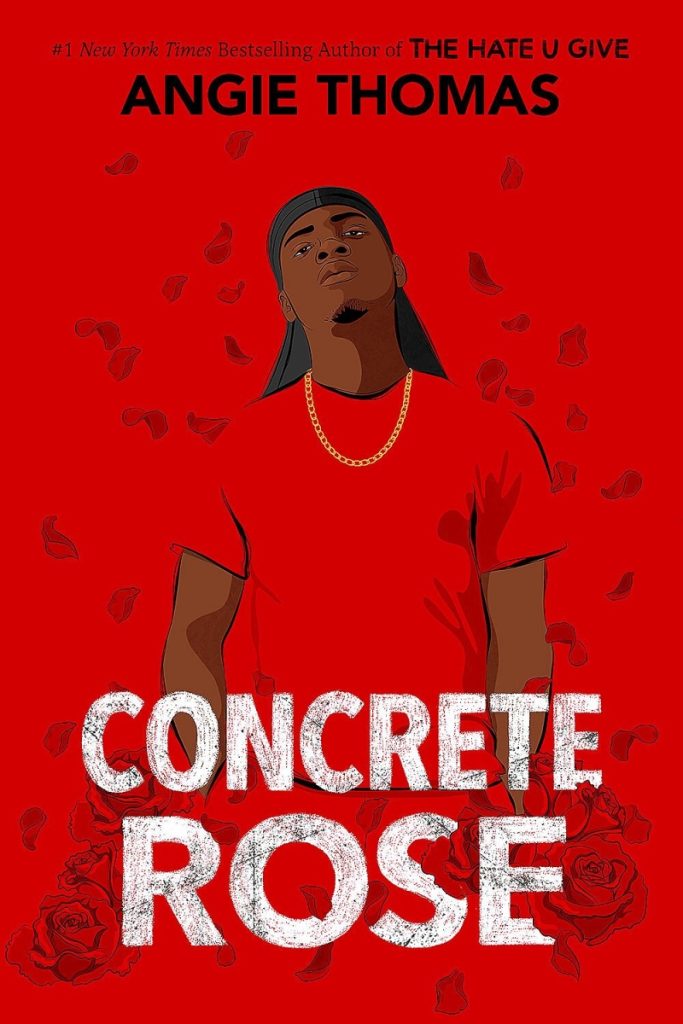 (Balzer & Bray 2021). It begins with Maverick, a Black seventeen-year-old, who has pretty much everything under control. He has a fly girlfriend, Lisa, who attends a different and elite school. He’s slinging dope in Garden Hills with the support of his older cousin Dre. On the rough side, his father, the former head of the King Lord gang, is serving time in prison while his mother has taken on two jobs to support her family.

Everything is fine until Mav learns he’s the father of a three-month-old baby—and the mother isn’t his girlfriend. Mav meets the baby, ready to help with the responsibility of parenting and the teenage mother splits, abandoning the baby. Mav takes care of the child under the guidance of his magnificent mother who insists that Mav does the real parenting, while she helps where she can.

Mav takes a job at the local grocery store, trying to follow the responsible path. Lisa couldn’t be angrier at him, of course, his having made a baby while they were in a relationship. Mav is trying to do the right thing, trying to support his son, Seven, but you sure can make a lot more money slinging dope, so he returns to that, successfully hiding it from his mother. And he’s still part of the street gang. And Lisa won’t accept that.

Tragedy strikes. Dre, his cousin and mentor, is killed in the hood. As is the way of the street, Mav must seek revenge. He thinks he knows who the murderer is, but he has to be sure. In a moment of weakness and within their despair, Mav and Lisa have unprotected sex and, yep, a few months later he discovers he’s going to be a father again. No way is Lisa going to make a family with a gang member. She’s too smart for that.

Mav is a loveable guy, trying to do the right thing as a parent to Seven, is flunking out of high school, his girlfriend hardly talks to him. Things are bad. The grocery store owner has Mav working the store as well as his garden. Mav is learning about gardening—both vegetable and flower—and is trying so hard to parent. And to convince Lisa that they and the babies could be a loving family.

Having read award winning The Hate U Give (known by its acronym THUG) so long ago I didn’t know how these characters played into the original. That is to say, this book works as a stand-alone. You don’t have to have read THUG, but you’ll want to. Growing up in the hood where gangs are multigenerational, where the little ones become the young ones who become the grown ones—it’s awfully difficult to break out of the culture. And Thomas shows it so well, with so much heart. Check these books out.