The voice of Zara, an aspiring teenaged photographer in Rhode Island, alternates 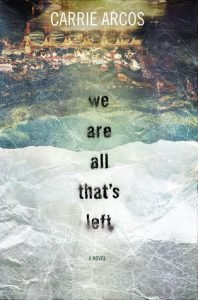 with the story of her mother, Nadja who survived the 1990s Yugoslav War in “We Are All That’s Left” (Philomel 2018), a novel by Carrie Arcos.

The Yugoslav War led to the breakup of the former nation of Yugoslavia. Serbs and Croats were bent on “ethnic cleansing” and ridding their country of Muslims. Nadja’s family, non-practicing Muslims, were all shot and killed as teenaged Nadja watched—hidden. She managed to escape to war-torn Sarajevo with the help of her non-Muslim boyfriend Marko. But he was gone now.

In Sarajevo, Nadja heard people screaming. “She decided if she were to get shot, she would not scream. She would not make a sound. She would be . . . silent and strong, like a large willow tree near the river.” It was no wonder she’d closed off. But after some harrowing years, she made her way to the U.S. and married an American physician. Considering her background, it’s clear to see why Nadja’s mothering skills were less than stellar. Zara is not close to her mother, but she longs to be loved.

Arcos begins the book with terrorist attacks in Rhode Island and around the U.S. Zara and Nadja happen to be at the farmer’s market when a terrorist’s bomb explodes, seriously injuring Zara and putting Nadja in a coma. Zara has the shrapnel excised from her back and face and returns home to her brother and attending grandparents. Her father spends much of his time in the hospital keeping busy and checking on his comatose wife.

Almost a universal experience among survivors, Zara says, “I think of . . . the people who lost limbs. Those who died. Why did I survive? . . . Nothing makes sense . . .” Not long before the attack Zara had refused to talk to her seemingly cold mother. “I wanted to be mad because I felt like it was justified, like anger gave me a strength to fight the loneliness and hurt I felt.” At the time her mother had the wisdom to say to her daughter, “It takes a stronger person to let others in.”

But now Nadja is in a coma. Zara longs to let her mother in—to know her. She wants to know about the war years. In her mother’s closet, Zara finds a box filled with mementos from the war—objects we have become privy to, as we read Nadja’s story.

Wise, handsome Joseph befriends Zara at the hospital. He studies world religions in order to deal with his own traumatic life experience and paraphrases Rumi, the Muslim mystic, saying, “The wound is the place where the light enters you.”

Zara is wounded inside and out. Eventually she realizes, “Scars . . . don’t diminish our lives, but make them richer somehow.” This is a story of mother and daughter, of love and bonding, as well as of survival.