What is more important in life than love and death? In Martha Brockenbrough’s young adult novel, “The Game of Love 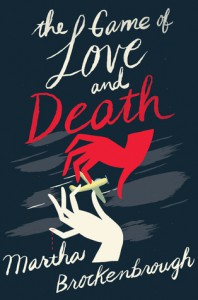 and Death” (Arthur Levine 2015), Love is personified as a gentle man. And Death, a hard woman.

The story begins February 13, 1920 in Seattle with the birth of two babies—Henry who is white and Flora who is black. Love chooses Henry as his player and Death chooses Flora. The game begins. Love, the weaker of the two players, wins, if Henry falls in love and marries Flora. Death wins if they do not fall in love, at which point she’ll take Flora. The deadline is July 1937 when the players are seventeen.

Love and Death meet unexpectedly in Venice on a gondola ride. Death “looking like an angel in a long coat of winter-white wool” and wearing a red cashmere scarf looks seventeen in this incarnation. Love has chosen middle-age “a reflection of the weariness he felt with his lot,” having spent an eternity losing the game. Was Death beatable?

Back in Seattle, 1937, Henry’s well-to-do parents have long since died. His guardian is a rich cold newspaper owner whose son Ethan is Henry’s best friend. Ethan is a bit of a slacker, has never learned to read or write, but fortunately Henry takes up the slack and keeps Ethan’s secret both in school (by doing his homework) and by writing Ethan’s feature stories. Henry is a little too good to be believed, but Love is his guy, so why not? (Don’t ask me how Ethan does on his tests at school).

Flora, also an orphan, is raised by her loveable grandmother and uncle with whom she owns a nightclub. She’s a fabulous jazz singer and an aviatrix who would like to do what Amelia Earhart is doing. Death is her guy, so the odds are she’ll, well, die. Of course we all will. But when?

Henry does not fit into his family, but he has an outlet. He plays a mean stand up bass—mostly classical, but he does love his jazz.

Brockenbrough is confident, honest, inventive, and succinct when she embodies the characters Love and Death. For instance, Death is there when the Hindenburg burns. “Death plucked the rising souls like flowers, decorating her mind with the residue of human experience while the fire lit and warmed her face.” Death creates herself as Helen, Ethan’s capricious cousin, trying to win Henry’s love, in order to win the Game. Sometimes she sidles around the ankles of the players as a black cat.

Love creates himself as James Booth and wins Ethan’s heart—in order to draw him away from his loving Henry—Love’s attempt to win the Game.

Of course the odds are against Henry and Flora’s love in racist pre-war America. Love is weaker than Death. Will Love ever win the Game? The book itself is handsome, with each of its seventy-one chapters beginning on black matte paper printed in white ink.