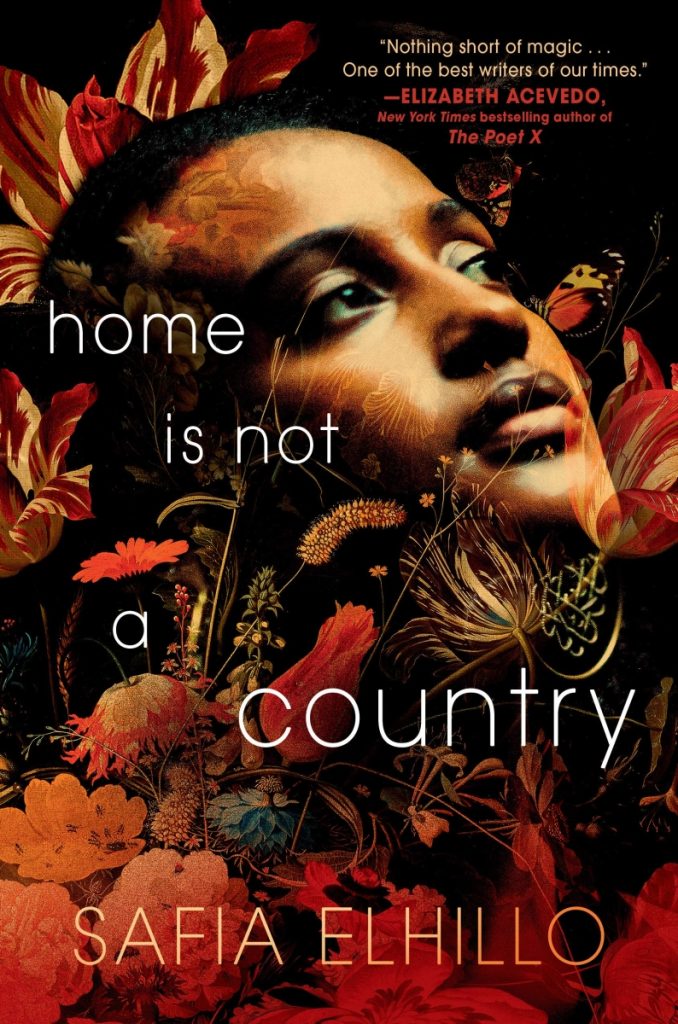 Before Nima is born, her father is shot and killed by Sudanese police. Nima’s pregnant mother manages to immigrate to America where Nima is born and grows up longing for the old country. Through Sudanese music and old photos, Nima learns about the colorful culture of her beautiful fun-loving parents. She longs for her heroic father and creates an alter ego for herself—Yasmeen—who she believes she would be if her parents lived happily in Sudan amongst their extended family.

Nima says: “I miss the country that I’ve never seen   the cousins/ & aunts & grandparents   i miss the help/ they could have offered   the secrets they knew/ that i never learned”. Thank heavens for her best friend Haitham who arrived the same way, inside his pregnant mother, at the same time. Nima’s mother “makes us tea/ boiled in milk   poured into mismatched mugs/ & hands us packs of captain majid cookies she gets/ from the bigala that Haitham & I call   ethnic wal-mart/where we buy everything   from bleeding legs of lamb/ to patterned pillow covers   & casettes/ covered in a layer of dust”.

Mama Fatheya, Haitham’s grandmother says, “ours is a culture that worships yesterday over tomorrow/ but I think we are all lucky to have left yesterday/ behind.” Nima’s love of the old country prompts Haitham to call her “nostalgia monster.” She loves the old tunes and their Arabic lyrics. She dances with her mother at home, but closes herself off at school until she feels invisible. Haitham is friendly, joking, and popular with everyone. He is Nima’s anchor. Until one day, white boys scatter her books and Haitham doesn’t come to her defense. Nima and Haitham’s fight seems insurmountable.

Soon after, in an ethnic hate assault, Haitham is attacked, wounded, and admitted to the hospital in a deep coma. His life hangs on a thread. Nima is devastated and in her misery of not belonging, having accused her best friend of ugly behavior, and furious at her mother for bringing them to this horrible country, she has a mystical experience. By enters her parents’ sepia photo she finds herself with her alter-ego Yasmeen in Sudan viewing her parents’ young life. Is Yasmeen a jinn, which Mama Fatheya warns the teens of repeatedly? Or did Nima invent her? Or both?

In a prolonged episode of magical realism, Nima takes us through old Sudan, her parents’ happy courtship, as well as the horrific and life-threatening experience of Khaltu Hala—Haitham’s mother—who was pregnant and unmarried in Islamic Sudan. Can Nima banish Yasmeen? Should she? Unseen, Nima overhears conversations and discovers a devastating secret about her father.

She returns to her actual life in America with new appreciation and love for her mother and their present life together. Not only does the beautiful language, insights of living between two cultures, and innovative formatting open our eyes, but the plot makes the reader turn pages. This is an important book.

Patricia Hruby Powell is the author of the award-winning books: Lift As You Climb; Josephine; Loving vs Virginia; and Struttin’ With Some Barbecue all signed and for sale at Jane Addams bookstore.  Books forthcoming about women’s suffrage, Martha Graham, Joe Ernst. talesforallages.com