“Moon Over Manifest” (Delacorte 2010) by Clare Vanderpool won the middle-grade literature jackpot, the Newbery Award, for 2011. 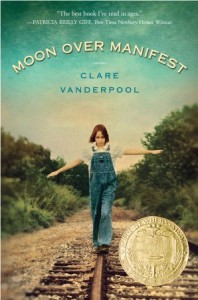 In 1936 Kansas, 12 year-old Abilene drops into the town of Manifest. That is, she literally drops off a freight train after years of riding the rails with her daddy Gideon. The Great Depression and the dry scorching dust bowl are both in full swing.

There are two stories here. The second is set in the same town, but 1917 through 1918 when Abilene’s daddy grew up–the time of World War I and the years that the Spanish influenza killed more thousands of people than did the war itself.

Rough and tumble Abilene aims to find out about her daddy’s earlier life, but it’s not easy, in spite of consulting Miss Sadie, the Hungarian “diviner”, who tells stories about and sheds insights into a huge cast of townspeople from 1917. They’re immigrants from all over Europe who worked in the coal mine and whereas it was a hard life it was a happier time for the people of Manifest. Twists and turns in this densely plotted book will surely surprise you. 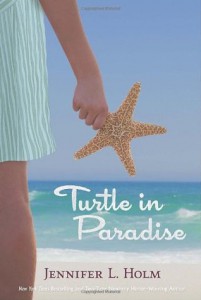 “Turtle in Paradise” (Random House 2010) by Jennifer L. Holm is the first of four Newbery Honor books and is also set during the Great Depression, but in colorful tropical Key West, Florida.

The 11-year-old protagonist, similar to Abilene, is likeable, smart and hard-shelled, which is why she’s called Turtle. Similarly, she has only one parent who has sent her away, but in this case, a mother who remains in New Jersey where she earns a living as a housekeeper.

Turtle is sent to her aunt’s house and must endure four pesky but industrious boy cousins who run a mobile baby-care operation called the Diaper Gang. When Turtle finds a treasure map it looks like she might end up on Easy Street. I appreciated the stream-lined plot.

The Newbery Award is decided each year by a committee of fifteen hand-picked librarians. Interestingly, they must all agree on the winner, so certainly some negotiations and deal-making must ensue, but I can only guess because it is a secret process. You can bet that the pool of winners and honors will be fine books, but I would have ranked these five books differently. You’ll find out more on my blog.

And here’s the blog part that goes beyond the review…

Both these authors used family stories–their grandparents’ stories–as the basis for their books. And each book explores the value of family.

Jennifer Holm is the author of two other Newbery Honor books–“Our Only May Amelia” (Harper Collins 1999) and “Penny from Heaven” (Random House 2006). But she hasn’t won the jackpot (the Newbery Award) which would pretty much ensure

that her book would remain in print forever and be in every children’s library collection, probably for the duration of book publishing and/or  the existence of libraries.

The jackpot winner is Clare Vanderpool debut novel, so you can hope and expect more good books to come from this author.

The other three books that I’ll be reviewing in my next posts are “Heart of a Samurai” (Amulet 2010) by Margi Preus; “Dark Emperor and Other Poems of the Night” (Houghton Mifflin 2010) by Joyce Sidman; and “One Crazy Summer” (Amistad/Harper Collins 2010) by Rita Williams-Garcia. All four novels, from the group of five books are historic fiction. And the two yet to be reviewed are FABULOUS. I think you all should read them or the ones that sound interesting and then we’ll rank them the way we see fit. Deal?

Thanks for reading. Please comment. It’s easy to subscribe and get a notice about these posts once every three weeks.