Do I really want to read a book about the apocalypse? I’ve dreamt too many times about being the 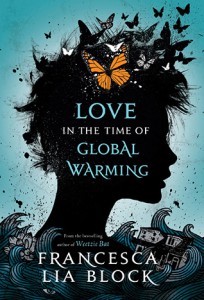 The girl, Pen, tells us “…I had been born and raised in a city built on fault lines…” so—she points out—the huge Earth Shaker shouldn’t have been a surprise. The rest of the family has run out of the house just as the tsunami hits. When Pen regains consciousness she is alone in the debris of her pink house in Los Angeles.

Block’s futuristic tale is inspired by Homer’s Odyssey. In that classic tale, Penelope was Odysseus’ wife, thus, our narrator is Pen. Block does not make the mistake of holding too close to the original tale. But as she always does, she tells with lyrical insights such as, “…my ears rang with the silence before danger.”

Sixty-eight days later, having lived off cans of food her disaster-conscious father had stock-piled, men invade Pen’s house. She gathers the growing courage born of devastation, steals the men’s van and sets out on her own odyssey. She must find her parents and her little brother Venice.

Pen discovers piles of clean bones, which lead her to the genetically engineered giants—paralleling the Cyclops of the Odyssey—who eat humans. And yes, the one-eye will come into play in Block’s story.

In the Lotus Hotel teenagers drink punch, hook up, and stay high. It turns out the punch is made from the red-flowered lotus that magically grows from cracks in the hotel floor. Pen’s mind “blooms” and she forgets the horrific recent past. There she meets the boy, Hex and they take off together in the van.

They are guided by orange butterflies, which seem to be the endangered monarch, until an old copy of the Odyssey becomes their guide. Beatrix who was once a soap opera star, and might be the witch Circe, imprisons Pen and Hex, until they meet Ez who is addicted to the cake he’s been fed by Beatrix. The three escape, Ez is weaned off whatever the cake/drug was and they meet Ash.

Before the big Earth Shaker Pen had planned to study art history. Her mother was an artist. Ez paints, Ash sings and plays the lyre, Hex is a warrior. And Pen? She wonders what she does.

Eventually Pen finds her way back home and small signs of life begin to appear in the yard outside her pink house. You can almost always count on the hope found at the end of a young adult book—one of their defining features, which makes them suitable for bedtime reading.