There are fractured fairytales and there are shattered fairy tales, such as “Stepsister” (Scholastic 2019) by Jennifer Donnelly. This is Cinderella told by the 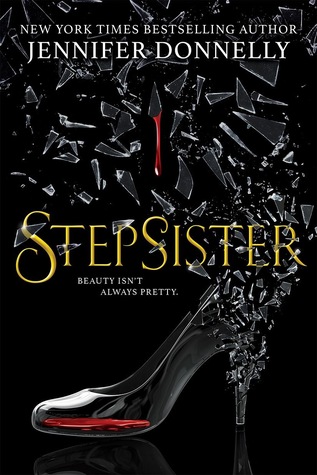 elder ugly stepsister Isabelle. Both Isabelle and her sister Octavia were cruel to Ella. But we all know that (Cinder) Ella won out and got the prince in the end. Our story begins just before that outcome.

The Prince comes around with the glass slipper and the stepsisters’ social climbing mother insists that Isabelle cut off her toes so that she might fit into the shoe. It works for a few moments, until the blood pours out of the slipper and her ruse is discovered.

Donnelly writes, “Mama wielded shame like an assassin wields a dagger . . .How many times had [Isabelle] cut away parts of herself at her mother’s demand? The part that laughed too loudly. That rode too fast and jumped too high. The part that wished for a second helping.” Isabelle’s sister Tavi also fails the shoes test and Cinderella’s fate is sealed. She rides off with the Prince.

It’s not easy to write an unsympathetic protagonist but in Donnelly’s hands we eventually love Isabelle and eventually we understand her younger sister Octavia (or Tavi) who had the historically unappreciated traits of being scholarly and outspoken. What is appreciated in past centuries and continues today is beauty. (Cinder) Ella has beauty.

Isabelle is athletic, bold, and her forthright declarations are considered rude—all traits not valued in girls of yore. Even today, this girl can have issues. But we’ve come a long way in our culture. So from our present American culture we can value Isabelle’s traits. She was a tomboy who, with the groom’s son, Felix, played pirates and fought play-battles and actually rode a moody stallion named Nero. Isabelle wanted to be admired. When she wasn’t, jealousy took hold. “Envy’s fine, sharp teeth sank deep into Isabelle’s heart.”

Isabelle says, “Sometimes it’s easier to say that you hate what you can’t have rather than admit how badly you want it.” She claims to hate Ella. Further along in the story she realizes it’s herself that she hates—and that is what she must overcome.

Fate, characterized as a crone, has cast Isabelle’s lot. But Chance, characterized as the handsome Marquis, wagers that he can change Isabelle’s future. Isabelle would be a pawn in their game of chess except for the presence of Tanaquill (Cinderella’s Fairy Godmother) who is not all goodness and shimmer, but shape shifts into a fox, making her quite fascinating. She tells Isabelle to find the lost pieces of her heart. And Donnelly, a master of similes says about the fairy, “Tanaquill snarled like a fox who’d lost a nice fat squirrel.”

Isabelle has lost Felix and Nero, in her mother’s efforts to smooth out her rough edges—to make her the girl Maman wanted. As you know will happen, Isabelle shows that a mean girl can atone, but it requires love—starting with self-love. And in order to have that, she must follow her dream.

Patricia Hruby Powell is teaches writing at Parkland Community education and is the author of the award winning Josephine; Loving vs Virginia; and Struttin’ With Some Barbecue among others         talesforallages.com