MIDDLE GRADE READERS, “Words in the Dust” (Arthur A. Levine 2011) is the story of an Afghan girl with a cleft lip, written by Trent Reedy after serving 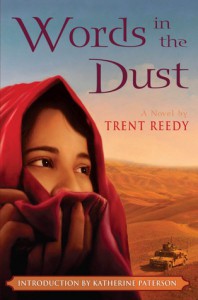 as a U.S. soldier in Afghanistan. He so much wanted to write Zulaikha’s story that he earned a master’s degree in writing children’s literature at the Vermont College of Fine Arts. And for that we can all be glad.

Through a young girl’s eyes we see life in an Afghan family. Zulaikha is ruthlessly teased about the deformity of her mouth as the marriage of her beautiful sister is being arranged. In between doing her daily chores, (patching the walls with cow dung, milking the cow, chasing and bathing willful young brothers, washing family clothes, picking pebbles from rice, cooking meals, and errands to the bazaar where she is harassed by mean-spirited boys,) Zuaikha worries what bride-price she would bring to her father or whether she’ll be married off at all.

Zulaikha’s own mother was killed by the Taliban for the crime of reading, and her Baba’s second wife, seems overly demanding. At the market, Zulaikha meets Meena, her mother’s friend and a professor before the Taliban denied women professions in education. Meena, in secret, teaches Zulaikha to read and write.

At around the same time, the U.S. Army rolls into town, spots Zulaikha at the bazaar, and offers to surgically correct her cleft lip. Baba, although he’s an affectionate Afghan father, must work with the U.S. army captain—a woman who gives orders to men. In Afghanistan, women are worked like barn animals and, in effect, owned by their fathers and husbands. They don’t give orders, they take them.

In spite of her bleak life, Zulaikha, by the end of the story, has the hope of education and much more possibility than her ill-fated beautiful sister, Zeynab, ever had.

Reading this book is a reminder that the U.S. military cares about the plight of Afghan women and children and is helping to build schools for girls in Afghanistan. A portion of the author’s royalties for this book go to Women for Afghan Women found at www.womenforafghanwomen.org