Most Newbery winners and honor books are fiction. Sometimes they’re non-fiction. On occasion books of poetry are awarded, such as “Dark 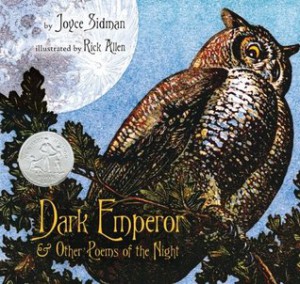 Emperor & Other Poems of the Night” by Joyce Sidman and illustrated by Rick Allen (Newbery Honor 2011).

Each of twelve lyrical poems is presented as a double spread. Each explores the mystery of an animal in the night forest and is further explained in a sidebar. In the poem, “Night-Spider’s Advice”, she says “eat your triumphs/ eat your mistakes” referring primarily to those unfortunate insects caught in her web. In the succinct sidebar we learn that most orb spiders, at dawn, eat their damaged webs for the nutrients needed for the next night of silk spinning.

“Dark Emperor”, the title poem, is a dramatic concrete poem written in the shape of the great horned howl. The poem speaks of owl’s “hooked face and/hungry eye” as he hunts a mouse. The sidebar tells us that owl flies silently due to his soft-edged feathers, so that its prey never hears his approach.

In “Cricket Speaks”, cricket tells us all day he is “napping and gnawing.” By “midnight/the trilling hour” he sings a “single/ searing/ unstoppable/ sound.” The sidebar explains how noisy the woods is at night, due to chirping frogs and hooting owls. But the loudest sound is made by the stridulating of the male cricket. One wing scrapes against the other, which has a serrated edge, and this can make a deafening sound. Stridulate. I love this word, which is included in the glossary. I’m looking for as many ways as I can to use it.

The illustrations are ink prints made from linoleum cuts then painted with gouache. The process is more fully described in the book. The resulting artwork is beautifully detailed and invites the eye to scan and discover. You might want to try the art form for yourself.

This book can be used in the classroom to study various forms of poetry, for natural science, for vocabulary, for artwork, but mostly it’s a great read.

I now plan to stridulate. I’m clapping, rubbing, brushing, slapping. No wonder Aesop’s grasshopper plays a violin—or maybe that’s just the Disney version of the “Ant and the Grasshopper”. I’ll supply links on my blog.

1934 The Grasshopper and the Ants – Walt Disney http://www.youtube.com/watch?v=wM1DgihKHVI

So…the last four reviews I’ve written have been books that have are all the Newbery Winners of 2011, all books published last year. If you’ve read some of them, you might want to leave a comment telling whether you’ve liked them. In fact, you might want to vote for your favorite. It’s always interesting to discuss books you’ve read. So please let me know. For review those books are

Heart of the Samurai

Dark Emperors and Other Poems of the Night