“Dancing at the Pity Party: a dead mom graphic memoir” (Dial 2020) is Tyler Feder’s graphic novel about her mom dying of 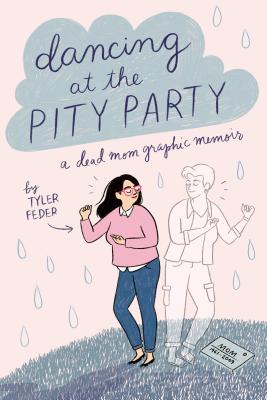 cancer. The subtitle tells you plenty about this tragic, funny, insightful story which is sort of a map for processing major grief.

Tyler’s illustrations augment the text rather than replicate it. On the first page she lists small and large teachings—one is: “She taught me to speak my mind.” Her picture is a mother bird feeding her fledgling a worm—just one example of how far she takes us with deep simplicity. The next page shows the fledgling alone in a nest. The words: “In 2008, the summer after my first year of college, she was diagnosed with cancer. By spring break my sophomore year, she was dead. Not to be melodramatic, but it was THE WOOORST.”

You love this polite subdued mom, who she describes as having a “sneaky” sense of humor—this mom who does “a blink-and-you’d-miss-it bunny hop” walking down the grocery store aisle, with a straight face like nothing happened. Feder says: “The treatments and doctors’ appointments were wildly time-consuming, like a part-time job with awful pay.” Yep, many of us have been there with a loved one—or for ourselves. And “Chemotherapy was totally different from what I’d always pictured . . . what chemo is actually like: basically a nail salon with IV drips instead of pedicures.”

On a page headed “Preparations” she says “If you can’t cry in front of the rabbi who’s officiating your mom’s funeral at a meeting discussing said funeral, when can you, though, you know?”

On the receiving line: “There were the people who grabbed my arms tightly and gave me such powerful eye contact that I felt their eyes burning a hole in my brain. . . hugs from near-strangers (with varying amounts of force, wetness, and odor).”

Maybe I’m telling you the funny bits so you’ll read it. But every page gives insights into grieving.

The service: “By that point, I was in full denial. It was almost an out-of-body experience. I felt like I was watching a movie of myself, totally devoid of the emotion the situation demanded.”

Her family writes her mother’s obituary. That hit home. So did the Kubler-Ross stages of dying which she also applies to grieving. And because she’s Jewish you get a bird’s eye view of the wonderful cultural benefits of sitting shiva, which includes: “… we took a series of the CHEERIEST PHOTOS EVER . . . The group photo, especially, could be in a museum exhibit about the surreality of death (or just denial, depending on how you look at it).” When the week is up: “We slowly lumbered through the neighborhood, a mass of salt-stained parkas and flushed cheeks. Somehow, there was no thoughtful piano score accompanying us, even though it would have been very appropriate.”

Ten years later the author is still recovering. And writing and illustrating this book helped that recovery. It will help a lot of us.