Teenaged Harper, raised by a single mom, is a sperm donor child, in “The Epic Story of Every Living Thing” (Labyrinth Road 2022) by Deb 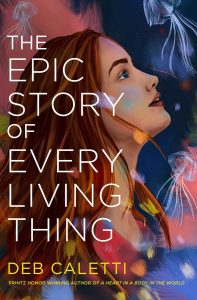 Caletti. Harper feels incomplete, not knowing anything about her father. Her mother claims to know nothing about the sperm donor.

Obsessed by social media, Harper stages portraits of herself, that her boyfriend, Ezra, shoots—Harper sitting along the ocean, Harper jauntily walking past “cute” shops, Harper with head in the clouds. She enhances and posts the photos to her huge following.

Someone on FB tells Harper that there’s a ‘Simone’ who looks just like her. Harper finds, admires and follows the confident Simone, a year or two older, and wonders who her father is. Then she meets Dario, a year younger, on social media, who has the same auburn hair and blue eyes. Dario is a sperm donor child and he’s done the research. They all have the same father. But he hasn’t found the donor’s name, until he does—Beau Zane.

Harper and Dario search and find several Beau Zanes and narrow it to a Beau Zane who has lived near many great dive sights. This Beau Zane now lives in Hawaii. Dario tells Harper that he has found forty-two kids fathered by donor Beau. Harper is horrified.

Boyfriend Ezra is sick of being Harper’s photo lackey and to Harper’s horror, drops her. In the meantime, Dario has decided they should travel to Hawaii to find their father. He rounds up Simone and then finds another half-sibling, Wyatt, who lives in Maui and is rich. Wyatt pays for everyone’s flights and puts them up in his condo.

The four find the great Oz, or Beau Zane, at a diving school on a Maui beach. They confront the handsome wiry auburn-hair blue-eyed Beau and to his credit he’s delighted. He teaches them all to dive, free of charge. Whereas Harper is anxious about everything, she passes the four-day course and now she can dive anywhere in the world. She finds great beauty underwater.

Beau, who lives with his mother, Greer, a pot-smoking mama to all, tells them of a shipwreck out in the ocean which they think is historic and possibly that of a great-great grandparent of Beau, therefore an ancestor of the four. The Navy wants to test a bomb in the area. Of course, this will destroy the coral reef and a large section of the surrounding ocean.

They cannot convince the Navy to halt the bombing so Greer wants to stage an eco-protest against the Navy. So early in the morning of the day the Navy is to detonate the bomb the Zanes call together all their boat friends to make a blocking flotilla. In the meantime, the six protagonists find an ailing whale caught in nets so they work to free her and miss the flotilla, which successfully blocks the Navy.

If you are intrigued by sperm donor children, ecology victories, underwater scenes, or historic shipwrecks, you might like this book.