In 1872, Jules Verne wrote “Around the World in Eighty Days,” the rollicking good novel of Phileas Fogg circling the earth. As the 19th century waned, adventurers were inspired to do likewise. 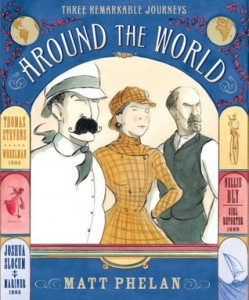 In the graphic novel, “Around the World” (Candlewick 2010), Matt Phelan tells the story of three such adventurers who take up the quest. If you’ve resisted graphic novels, resist no longer. Phelan’s art is captivating and dramatic without being bombastic.

Thomas Stevens, the first of the three adventurers, is a former miner who sets out in 1884 on a high wheeler—an early bicycle with an immense front wheel. The bicycle was evolving as Stevens took his ride just as a four-wheeler driven by a gasoline engine was being born. Yep, the automobile. So you get some interesting history along with Stevens’ ride, which ended in 1886. This was no eighty day trek. Stevens didn’t use hot air balloons or camels as did Phileas Fogg. How did Stevens cross the oceans? Well, he took a steamship for those bits.

Next comes Nellie Bly, girl reporter, who sets out in 1889, backed by her newspaper, the “New York World”. By steamship, train, horse and carriage, Nellie races against time, gaining publicity along the way. She meets Jules Verne in France, has scheduling set backs, is threatened to be outdone by a surprise competitor, gains more supporters and fame, and circumvents the globe in seventy two days. Nellie becomes a celebrity—the first in the media-driven modern world.

In 1895 retired sea captain, Joshua Slocum, rebuilds a trashed vessel and sets out from Fairhaven, Massachusetts. His wife declines to accompany him, so he sails solo. In his thirty-six foot craft, Slocum navigates by the stars, weathers horrendous storms, a tsunami, hallucinations brought on by tainted food, the horrific conditions around Cape Horn, and finally he anchors back home at Fairhaven after three years on the high seas.

“Reading” these three remarkable journeys is a grand adventure. If you love it the way I do, you might also try Matt Phelan’s “The Storm in the Barn” (Candlewick 2009). If you’re a teacher or the parent of a reluctant reader, consider graphic novels or “sequential art” as a bridge toward reading. To read graphic novels requires concentration and can teach the skill of inference.

At Matt’s website you can see the trailers for the books which shows much more of the art. Check it out.