Marilyn Nelson tells a story of growing up black, in the fifties, as her family criss-crosses the nation to follow her father’s 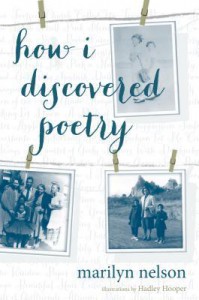 From Ohio they move to Connally Air Force Base, Texas. Nelson writes “I’m the new girl in Dick and Jane country . . . the other children faceless as grown-ups . . . We ducked and covered underneath our desks . . . from the hide dragen bomb.”

We’re reminded of a very early understanding of death—the narrowness of early life—when a relative dies. “They said she was in that box. She was dead . . . When you die, you go to a different school.”

Nelson’s family makes history in Smoky Hill AFB, Kansas, 1954, when her Mama, in “Career Girl,” “ . . . teaches second grade in the base school. Her all-white class may be a Negro first.”

Nelson’s childhood ruminations often remind me of mine. Her mother who grew up in Indian Country had a Creek boy as a sweetheart. Her father says, “‘Marilyn, you could have been named Pocahontas!’ The room disappears. A me with another name /An Indian me? How different could I be, and still be me?”

When the family is transferred yet again, they set out cross-country. “The miles enter my eyes and disappear like cigarette smoke from the car window.” She sympathizes with those living desolate houses they pass in “the boonies, far from any town . . .You could just . . . send a postcard signed, Be happy. God.”

In Mather, California, she finds a Negro friend, Helene. A blond girl calls them the “N-word.” “Helene thumped a lump on her forehead before she was done.”

Poems switch from a universal childhood experience—playing horses or lying in in “wild poppies, dreaming as clouds unfold”—to a black experience—“They think brown is a contagious disease . . . A mob attacked a girl for going to school . . .” and a line later— “I’d give anything to have a pony!” in the poem, “Cloud-Gathering.”

In Kittering, Maine they live across from the library and a block from the ocean—a short-lived bliss. On the road to a new home, “Daddy corrects white men who call him boy.” In Sacramento, 1959, “I’m learning that Negro is a language I don’t speak . . . I get good grades because I’m curious and I like to read, and NOT because I’m “trying to be white.””

In Fort Worth, Texas “My all-black classmates act like I’m from mars. Are you the girl from California? Talk for us. And these boys act like I’m cute!” In Oklahoma with her three best friends—all white—“We’re a quartet of geeks.”

Young Marilyn Nelson wants to be a poet and makes a plea to the cosmos, “Give me a message I can give the world.” I think the cosmos answered her prayer.