Outspoken Dr. Mary Edwards Walker, an American woman born in 1832, was a Civil War surgeon and Union spy, an advocate of women’s dress reform, and a 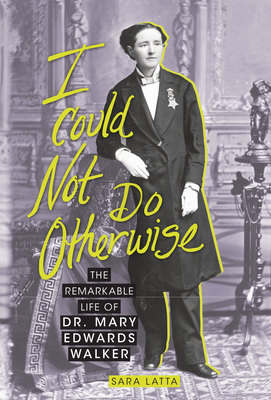 suffragist. Although she was a contemporary of Elizabeth Cady Stanton and Susan B. Anthony, Mary saw things differently than they did. “I Could Not Do Otherwise: The Remarkable Life of Dr. Mary Edwards Walker” (Zest Books 2022) by former Champaign resident, Sara Latta, is a deeply researched and a highly readable nonfiction book.

Whereas Stanton and Anthony wore the new bloomers of the day and believed in dress reform for a time, they ceased to wear bifurcated skirts, feeling that dress reform was overshadowing their true mission—women’s suffrage. Mary Walker felt that wearing trousers and a tunic or jacket to below the knee could free women to be more active and therefore healthier. As a doctor, she knew that corsets (being the undergarments of fashion), which were laced so tight that the organs were rearranged inside the body, were ridiculously unhealthy, resulting first in a woman’s propensity to faint, and a general malaise.

Stanton and Anthony worked lifelong for a constitutional amendment that would give women the right to vote. Walker felt that a woman’s right to vote was built into the original constitution when it said “all people are created equal” and that fighting for an amendment was unnecessary and in fact worked against woman’s full rights because they were already proclaimed in the Constitution. She felt that the Constitution simply needed to be interpreted correctly, and worked accordingly.

Mary worked tirelessly alongside grateful male surgeons during the War Between the States but was unpaid by the military. To support herself, she’d have to take breaks and do lecture tours, talking about the plight of women, encouraging women to become activists, as well as lectures about the war and about surgery—topics that interested both men and women. When she toured in Europe, she was an immensely popular speaker. Back home, she was frequently considered too outspoken and perhaps too blustery to be taken seriously. Which is why, I supposed, she’s not a household name today. In her day, she was.

Dr. Mary Walker was briefly married to another physician, who turned out to be unfaithful. As all the cards were stacked against women, it took her many years to procure a divorce. But Mary wasn’t one to give up. She eventually got her divorce.

Photos, their captions, and sidebars offer loads of fascinating information about issues of the day in addition to the primary story of Mary’s life. The information is well-cited for the reader who wants to delve deeper into the topic. This book shows the plight of women in the workplace, the home, and her access to rights. If I had to write a school report, I’d surely write about Dr. Walker by starting with this book.