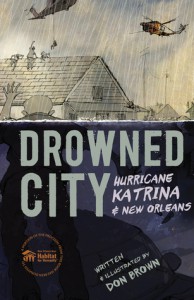 2015), written and illustrated by Don Brown, is a powerful nonfiction graphic “novel”—that is, written as a comic.

In early August 2005 an “unremarkable wind” from Africa crosses the Atlantic, becomes a category one hurricane, is named Katrina, and sweeps across Florida to kill six people. It augments to a category five, the “most catastrophic,” and everyone waits for it to batter New Orleans with its 155 mph winds.

New Orleans in the lowlands is vulnerable with its aging levees and inadequate pumping system. Pictures show the eye of the whirling blue storm “lifting the ocean surface into a kind of massive bubble.” The water level will be raised 25 feet above normal. The National Weather Service announces that Katrina will hit New Orleans in twenty-four hours on Monday, August 27th.

Cut to the 80% of New Orleans people who evacuate. En route, they’re stuck in deadlocked traffic. 200,000 people remain in the city, due to poverty (no car, no bus fare) or stubbornness. Trains offer to take people out of the city. The government declines.

Katrina diminishes to a category three, slips east and hits Buras, wiping out the entire town. Fortunately, everyone has evacuated.

Water overflows the levees of New Orleans. A million gallons of water per minute flood Lake Pontchartrain. The pumps can’t keep up. “Water rolls down the street” floating cars and loose barges down the avenues. People are forced into their attics by rising water. If they can’t cut their way out, they drown. A refiner tank bursts and crude oil is added to the mix.

People cling to floating cars, houses, chests—anything—as the rain pours down on them.

People seek shelter in the Superdome, but it is under-stocked with food, water, bedding. Plus, it is compromised and leaking. Police are rendered helpless by the magnitude, and some flee.

Once the rain stops, Louisiana Department of Wildlife & Fisheries, Coast Guard, and individuals rescue people using small boats, but the onslaught of insects and snakes is horrifying. There is no electricity, no lights, no ac. The weather is stifling. Stores or looted of SUVs, computers, TVs. People in sweltering darkened hospitals die.

No aid from the government—state or federal—is forthcoming. Leaders are arguing among themselves. Communication is abysmal.

The catastrophe is beyond reckoning.

Almost all the references that Brown used are contemporary news programs—PBS, CBS, ABC—and newspapers. The drawings add much to the tragic episode in the nation’s history, in this slim volume—a fast read. A stamp on the front cover promises that a portion of the profits goes to New Orleans Area Habitat for Humanity.