Remember the news about the twelve young soccer players trapped in the Tham Luang cave in Thailand in 2018? Rescue teams from all over the world 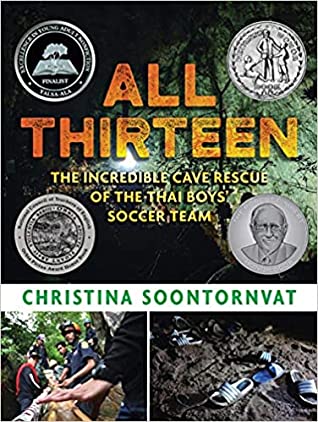 arrived to find and remove the Thai kids and their young coach from deep within the Earth? This remarkable story is retold by Thai-American author Christina Soontornvat in “All Thirteen: The Incredible Cave Rescue of the Thai Boys’ Soccer Team” (Candlewick 2020)—and what a book it is!

Soontornvat gives the reader a deep understanding of Thai culture—the people’s will to help, stay calm, and be cheerful. We learn about each of the boys, Coach Ek who grew up in a Buddhist monastery preparing to be a monk, pithy details about the Thai volunteer engineer who pumped water out of the flooded cave, Thai Navy Seals who are open water divers, the American military and its leader Hodgson, the British cave divers who swam the kids out 17 and 18 days into the ordeal—and so much more.

The boys ride to the cave on their bicycles after a practice with the Wild Boar Soccer Team on June 23. Barefoot, they hike into the cave. The enormous mouth of the cave soon becomes a tunnel, narrow but walkable, opens to the next chamber, then narrows further, opens into the next chamber then narrows until the boys must crawl. Then, unfortunately, the heavy rains start a month earlier than normal. The boys begin their return and realize their path is blocked by deep rushing waters. Under the guidance of Coach Ek, they venture deeper and deeper to find the safety of dry ground. Coach Ek expertly leads them to “Chamber 9.” Off go their flashlights to save battery power. They lick the walls of water which is plentiful. And they wait. And meditate, which is familiar since they’re all Buddhists. Coach Ek is masterful at keeping them calm.

That night, rescuers begin to arrive. In the meantime, we learn about the porous rock which is already saturated with water. Vern, a cave diver from Britain—the epicenter of water-filled caves—lives locally. Open water divers (Thai Navy Seals) arrive, but they’re unable to dive through the narrow tunnels. American military arrives. The Governor of Thailand becomes the system coordinator. So many factions must agree on how to rescue the boys—everyone must compromise, but how can it be done best? How can it be done at all? Three more British cave divers fly in. The rain keeps coming and the cave fills with rushing, muddy water.

A Thai man living in Marion, Illinois flies in—one of many unpaid volunteers—and without orders starts diverting water from atop the mountain. When he can’t obtain PVC pipe he makes gutters of huge split bamboo. When he can’t obtain rope or cable, he binds the bamboo gutters with jungle vines. The photos of the makeshift technology and the illustrations of the water filled tunnels are clarifying—and terrifying.

The Americans bring in high tech equipment. Police dogs are unable to detect the boys. Nest collectors (for bird’s nest soup) and high-tech teams search the mountain side for another entrance to the deep cave. But no one knows on Day Ten if the boys are alive. We, the reader, know they’re alive, but starving. And on this day two British divers have breached the dangerous intersection of tunnels and have swum an hour further to find the boys. There’s a video of that first meeting. https://www.youtube.com/watch?v=l_C90OPyldI

But how will they get the boys out of the rushing frigid water? They think they have a 60% chance of success. It takes another eight days. Get hold of the book and read the breathtaking and controversial details.

Patricia Hruby Powell is the author of the award-winning Lift As You Climb; Josephine; Loving vs Virginia; and Struttin’ With Some Barbecue all signed and for sale at Jane Addams bookstore.  Books forthcoming about women suffrage, Martha Graham, Joe Ernst. talesforallages.com