“Wonderstruck” (Scholastic 2011) is a novel by Brian Selznick, told half in writing, half in drawings. It opens with wolves running at the reader. They’re so close you see only their eyes, then so close, one eye and then closer yet. Are 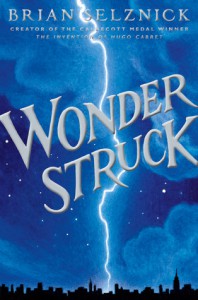 the wolves a dream?

Ben wakes up. So it was a dream? The written story begins in Gunflint Lake, Minnesota in 1977. Through the wall, Ben, who is deaf in one ear, hears his aunt and uncle talk about selling his Mom’s house at the other end of the property. After all, his mom had died. But sell his house? What about his stuff? All he has with him is a box of bird skeletons and found odds and ends. 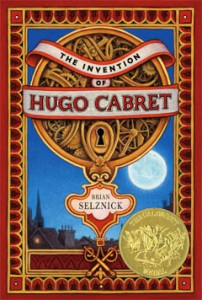 Even though a storm is brewing Ben runs to the house where he lived with his mom.

Turn the page and we’re back to exquisitely rendered drawings of a young girl in New Jersey, 1927. She’s making a scrapbook of the actress Lillian Mayhew. The girl runs outside into an urban setting.

Turn another page and we return to the written story—Ben’s story, which parallels the story of the girl—Rose, who we realize is deaf. It’s storming in both stories, which heightens the mystery. Where are Rose’s parents? Who is Ben’s father? At the moment that Ben finds a clue in his mother’s closet, he blacks out.

Ben wakes up in a hospital bed, now completely deaf. Was the house struck by lightning? He dreams of wolves again. This time they’re running down the streets of New York City.

In both stories—the pictorial and the written—each child, separated by fifty years, is running away to New York. Ben enters the American Museum of Natural History. Is it the same place that’s depicted on Rose’s post card? Is Rose seeing the same dinosaur skeleton that Ben just passed?

The two stories converge in a surprising manner, leaving the reader feeling rather ebullient. Rose and Ben’s realistic connection is more than satisfying. This is no fantasy. And the wolves were more than a dream.

“Wonderstruck” is not a graphic novel with multiple frames per page, but it is sequential art. And wow—what art. The excellent movie, “Hugo,” is taken from Selznick’s first such book, “The Invention of Hugo Cabret” (Scholastic 2007), a Caldecott Medal winner. Both books and movie are “must-sees.”

See the trailer and listen to the author speak of the creating process. http://www.amazon.com/Wonderstruck-Brian-Selznick/dp/0545027896