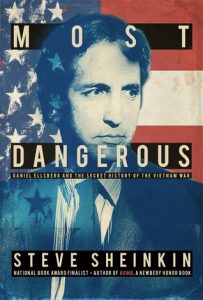 three books including his most recent “Most Dangerous: Daniel Ellsberg and the Secret History of the Vietnam War” (Roaring Brook 2016). No wonder. It’s thoroughly researched, clearly stated, and reads like a thriller.

Ho Chi Min came to power in Vietnam at the end of WWII. America supported him briefly, then slighted him because he was communist. Vietnam divided into North (Communist) and South. The U.S. with its Cold War fear, needed to halt Communism.

A bright young man, Daniel Ellsberg, went to work at the Pentagon.

President Johnson wanted to fight a war against poverty, ignorance, and disease. Instead he was handed the Vietnam War. In Top Secret documents he was advised that the (communist) Viet Cong had more staying power and the U.S. could not win the Vietnam War. The Johnson administration systematically lied to the American people, saying that North Vietnam initially fired on the U.S. Not true. When Johnson sent 200,000 U.S. soldiers he told the American people that he sent 125,000. He said the war would be brief. He knew it would be long. But he did not want to be humiliated as the first U.S. President to lose a war.

Working with Top Secret Pentagon papers, Ellsberg knew all this. Ellsberg was demoted for sneaking a peak at a forbidden binder. But he was able to copy and take the 7,000 Top Secret war report when he was fired. These became known as the Pentagon Papers. Intense, intelligent, and deeply patriotic—Daniel Ellsberg went to Vietnam to try to find a way to win the war. Or end it.

In 1966 Secretary of Defense MacNamara, knowing we couldn’t win the war, didn’t tell President Johnson. Johnson escalated the war and lied to the American people again. He sent Henry Kissinger to Paris for Peace Talks with South Vietnam President Thieu. Presidential candidate Richard Nixon used his friendship with Thieu asking him not to cooperate in the peace talks so Johnson would look bad and he—Nixon—could win the presidency, which he did.

President Nixon secretly escalated the war, bombing Cambodia. Still in Vietnam, Ellsberg realized that the South Vietnamese wanted the war ended under any circumstances. We were there because no U.S. president wanted to lose. This, Ellsberg felt, was an abomination.

Ellsberg leaked the Pentagon Papers, first to the New York Times. The government ordered the newspaper to stop printing and went after Ellsberg. But Ellsberg had already gone to the Washington Post. Then the Boston Globe and the Chicago Sun Times. Nixon was in a strangle hold. He sent FBI workers to illegally take Ellsberg’s psychiatry records. Those agents (who were trying to seal leaks) became known as the Plumbers. They failed miserably. Nixon’s presidency ended. The Vietnam War ended.