JoAnn Allen Boyce was one of twelve African American students who desegregated Clinton High School in eastern Tennessee in 1956. She is 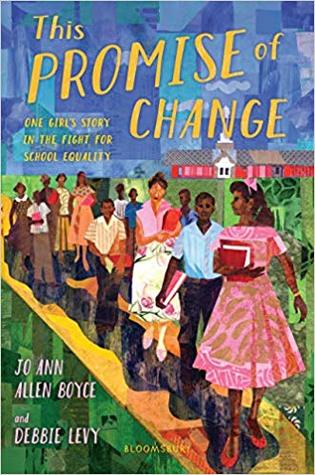 also the coauthor along with Debbie Levy of “This Promise of Change: One Girl’s Story in the Fight for School Equality” (Bloomsbury 2019).

The landmark Supreme Court case, Brown vs. Board of Education (1954) ordered the desegregation of schools. Clinton was one of the earlier southern schools to test the case when twelve courageous teenagers decided they wanted the education that the until-then all white Clinton High School could provide. Plenty of white students threaten the Black students, but some are friendly. And JoAnn is immediately popular and even gets elected president of her class.

Black and white people seemed to have gotten along fine in Clinton, until white townspeople experience their teen children in school together. Teens in close proximity might like each other; the potential of mixed marriages or mixed “breeding” instills terror in the white population and the town’s true colors emerge. In JoAnn’s neighborhood one family used to borrow a cup of sugar and return with a cake in exchange. Not anymore.

Allen and Levy via a Face Book connection. They communicated by email and phone from southern California (Allen) to New York (Levy). Allen would tell Levy stories; Debbie would take copious notes and due to JoAnn’s articulate nature, sometimes those stories could be written almost verbatim at times. Heres a story: “Negroes are not banned from stores, but at the grocery store downtown, if a white person is in the bread aisle, we wait. We do not enter that aisle while the white person is contemplating backed goods… it applies to milk and scouring powder too…These are the rules. We follow them and they keep us safe. We don’t like them.”

JoAnn Allen’s “own voice” informed this book in a way that Levy, who is white, could not have done on her own, just as Levy as a professional, talented writer could bring out JoAnn’s story in a manner that benefited them both.

I learned a detail about going to segregated movies. You may buy popcorn, but you leave and enter the separate door that leads to the “buzzard’s roost.” There was much to know to “keep safe.” Another way to say, “stay in your place” with Jim Crow laws.

JoAnn played a pivotal role in the 1956 Clinton High school year, visiting Washington DC to describe their endangered lives in Clinton. Clinton H.S. desegregated before the “Little Rock Nine” teens integrated Central High School in 1957 and Ruby Bridges in New Orleans desegregated William Frantz Elementary in 1960. Why do we know so little about Clinton? Probably because there were no iconic photographs as there were in the other situations.

This is a riveting and important book.