It’s 1944. World War II is raging across Europe and the Pacific when Margot is taken from Iowa and Haruko from Colorado in “The War Outside” (Little 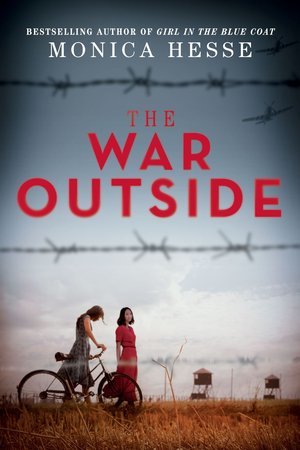 Brown 2018), by Monica Hesse. Now the two teens, each lives with her family in a dusty Texas internment camp for those accused of colluding with the enemy.

German American Margot says, “In the middle of this dust, in the middle of these chaotic arrivals, I feel I am watching a secret.” American families are imprisoned by the U.S. government. What did their parents do? Margot’s father is keeping a secret, clearly, all the while her mother’s health is deteriorating radically. Did her father fraternize with Nazis?

Japanese American Haruko was popular in her Colorado high school. After all, she’s cute and she laughed at the jokes made against Japanese people. Margot goes to the same school as Haruko rather than the German school in Crystal City Internment Camp in order to receive a better education in preparation of her dream to become a scientist.

Each imprisoned family lives in a prefabricated “victory hut,” and the food isn’t bad. The prisoners say, that’s in case the Japanese win the war. The USA wants their prisoners to look well fed. But the Japanese prisoners are fed Chinese rather than Japanese rice—one of many interesting details.

The two girls start meeting in the dark icehouse, sitting on bales of hay. They discuss their families—first tentatively. Then Haruko asks if Margot’s father is a Nazi. No, they just lived in a German farming community—they aren’t Nazis. Her father went to one meeting in Iowa to hear a band and a speaker, as a favor to a friend, just to keep neighborhood peace. Wasn’t that true? Haruko says that she thinks her father is keeping a secret.

Margot says, to survive the camp you must put the experience in a box and keep it there. Tell yourself that you choose to be here, so you have control of the box. Haruko is angry all the time. What did her father do to get them here? He was the one imprisoned but the rest of the family chose to join him.

Haruko’s brother Ken, enlisted as a U.S. soldier, hoping it would help the family cause. When he gets injured he visits his family in the camp. He’s not the same. At the icehouse Haruko cries in Margot’s arms. Their relationship grows more intimate.

Haruko’s father, a hotel manager in Colorado was accused of passing messages to hotel guests. Is he a spy? West Coast Japanese were all evacuated to prison camps, due to their proximity to Japan. West Coast evacuees lost everything whereas Coloradans had the luxury of selling or giving awayt their possessions. Yet, Executive Order 9066 allowed the government to send Americans anywhere—based on the artwork they displayed on their walls or if they practiced martial arts.

There’s so much to learn here. And the girls—is it a crush? Are they in love? One betrays the other. Why? Vulnerability and fear? What is the truth?