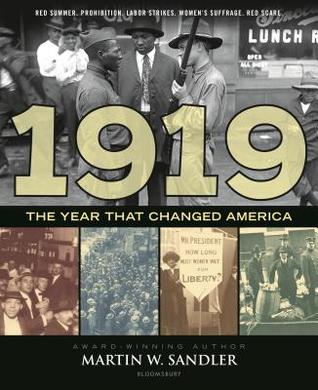 Sandler’s opening chapter would be humorous if it weren’t so horrific. A huge vat of molasses—2.3 million gallons—explodes in Boston’s crowded North End in mid-January 1919 burying people and horses alive or blowing them clear into the bay. If the reader is anything like me, they’re riveted. Molasses?

Molasses connects us directly to many issues of 1919. Molasses had everything to do with slave trade. Sugar cane was produced and processed into molasses by enslaved people. The enslavement led to the racial unrest and riots that would break out across the country in 1919 in Chicago, Washington, Charleston and elsewhere. Black soldiers returning home from World War I, which ended November 11, 1918, hoped and expected a degree of equality after fighting for their country. Instead, they were met with riots and lynchings. White mobs were threatened by these newly confident black men.

Explosives for the war were made by mixing molasses and ammonium nitrate. With the war over, manufacturers were stockpiling molasses to make rum before the 18th Amendment—

Prohibition Act—could be ratified and consumption of alcohol would become illegal. Prohibition went into effect January 16, 1919. It’s of interest that there was more drinking done once it was illegal, when the saloons exclusively for men gave way to illegal speakeasies which included women.

But women were largely behind the prohibition of drinking, in order to protect their families from drunken husbands. Women were working for the 19th Amendment—women’s suffrage—which would be passed in 1919 and ratified in 1920.

One chapter, “The Red Scare” outlines the fear of communism at this time. “Red” denotes Communism because they rallied around a red flag. A Communist government had been installed in Russia in 1917 while the U.S. has a capitalist form of government. Many Americans felt threatened by the spread of Communism.

Another chapter, “Strikes and More Strikes” describes “work stoppages in almost every field of endeavor.”

Page long “sidebars” include topics such as Immigration (then and now).“Those Opposed” speaks of the citizens who resisted the suffragists, believing that women should not vote because they belonged at home, were too emotional, too fragile, and not smart enough. “The Doubly Disenfranchised” are the African American women, who even after that ratification of the 19th Amendment were still barred from voting by white supremacist laws. “The Harlem Renaissance” describes the blossoming of African American artists in New York City, during the Great Migration. “The Second Red Scare” tells of the 1950 Joseph McCarthy era. And others.

The photos are provocative. Detailed timelines end each chapter. At just less than 200 pages this is a fascinating historical document of not only one year, but how it changed our nation.