Germany 1945. The war has ended. The concentration camps have been liberated and Zofia Lederman, just released from Gross-Rosen death camp, is 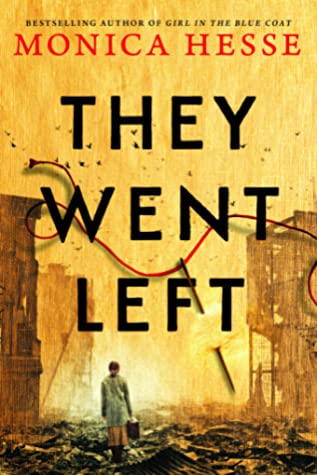 searching for her brother, Abek. She knows that the rest if her family—her parents, grandmother, and aunt—were all sent to the gas chambers when they all arrived at the camp, in “They Went Left” (Little Brown 2020) by Monica Hesse.

Zofia, 18, accompanied by a young Russian soldier, travels through Germany to her home in Poland, hoping to find Abek there. No Abek. Clearly the apartment was occupied by the enemy during the war. She finds her old neighbors unsympathetic. Anti-semitism has not been erased by the atrocities that occurred during the war. She eludes the soldier and sets out for Germany in search of Abek who she’d promised to protect.

Eventually she finds herself in a displaced-persons camp, but Abek is not here. Nearly everyone at the camp is searching for someone. One young woman searches for her twin sister, having been separated after surviving medical experimentations by the Nazis. A former heiress is becoming a farmer and waits to marry a fellow worker in a simple ceremony before finding their way to the new state of Israel. Enigmatic Josef assists at the camp and drives Zofia to another station where her brother just might be or might have been seen.

Zofia places notes requesting information about Abek everywhere, questions everyone, sending out a broad search net. And waits. Having suffered trauma and cruelty in the camps, she is not healthy, either physically or mentally and her reality becomes distorted. But she is alive.

Will she heal? Or will she succumb to mental hallucinations? Her memories are not reliable. Just as she begins to wonder, the reader, too, comes to understand that she’s an unreliable narrator. She is surrounded by so many others, also in crisis. This is the aftermath of the war and each character wonders what a new normal might become for themselves. Throughout her search Zofia is attracted to the mysterious Josef but Josef protects himself behind a thick veil of secrets. Love could be an antidote, but who is this man?

Zofia comes to believe that love is a decision. You can decide who to love. The displaced people support each other, giving moments of joy within the story, such as the wedding of the farming couple. Will one couple’s solution work for Zofia or will she have to find her own way? The book ends with no overall happily-ever-after, but there is hope. It is an authentic outcome, surely.

Monica Hesse’s raw and powerful, and well-researched story, is relevant today. Do consider reading it.