While reading “The Unfinished Life of Addison Stone” (Soho Teen 2014) by Adele Griffin, I was 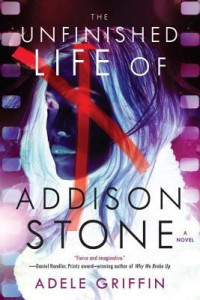 reminded of my sister describing her snowboarding son as “tragically cool” from the time he was in 4th grade. She was speaking of his attitude and it always made me laugh. But saying that the teenage artist phenomenon, Addison Stone, was “tragically hip” is, indeed, a tragedy.

The book opens with the news that prodigiously talented (fictional) Addison Stone—a Mozart of the contemporary New York art scene—has died tragically at the ripe age of 18. We occasionally hear Addison’s voice from an interview in an art magazine, but mostly we hear about her from a chorus of voices that include her best friend Lucy Lim, who always supports her; Jonah Lenox her high school boyfriend; Zach Frat her first New York high society boyfriend who is clearly destructive; from artist and love-of-her-short-life Lincoln Reed; and from family members, art agents, high society characters, and others.

The book is made to look like a biography, in part, by including abstract and fascinating portraits that Addison has painted and photos of Addison, played by a slightly too-pretty model, as well as newspaper articles and art magazines featuring Addison as cover girl.

We are told Addison, née Allison, was bored in her Peacedale, Rhode Island high school in spite of being lauded as a singular art prodigy—even by the other art students. She’s mentally unstable and under the care of several psychiatrists and her precarious balance is maintained by a drug she calls Z—when she takes it.

Her well-meaning but flawed high school art teacher and his wife—the Fieldbenders—help get her a toe-hold in the New York City art scene. They think it will help Addison to break away from her ineffectual mother Maureen and her angry redneck father Roy. Interspersed among the many voices, which often tell more about themselves than about Addison are “Author’s Notes” in which the author talks of her “research” into Addison and her contemporaries, furthering the construct of this faux biography.

A favorite aspect for me is the performance art events constructed by Addison. For instance, she films herself stealing her self-portrait from a new exhibit at the prestigious Whitney Museum, and leaves a film loop of the heist running, in place of the portrait. The way in which she carries off the heist with two other street artists is pretty believable.

There is some question about the exact circumstance of Addison’s death but we know it has occurred while trying to install her work, illegally, of course, on a Manhattan bridge. Are either or both of her last two boyfriends involved? The nefarious former drug dealer Gil? But this is not what drew me to the final page as much as the innovative format of many voices offering not only their opinions but telling the story of Addison’s wild life.

Patricia Hruby Powell’s book Josephine: The Dazzling Life of Josephine Baker was chosen by the Huffington Post as the Best Picture Book Biography (artist) and is on many Best Books of the 2014, including, PBS, NPR, NYPL. talesforallages.com