Cuban-American poet, Margarita Engle, tells the story of a pre-teen sister and brother, reunited in Cuba in “Forest World” 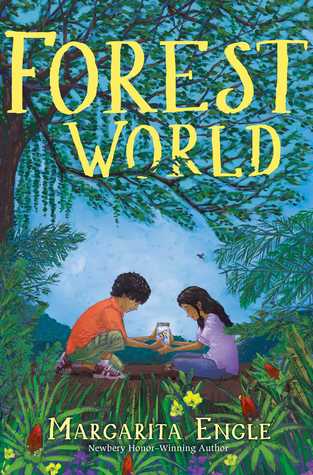 When the siblings were quite young, their mother fled Cuba to America by raft with her infant son Edver, leaving behind Luza with her father in their Cuban rainforest home. Now she’s sent Edver to Cuba to meet relatives he doesn’t know. He didn’t even know he had a sister. Luza, a year older remembers the dramatic exodus and has suffered, wondering why her mother deserted her.

Luza, with her father and grandfather, protect a patch of endangered rainforest against poachers and destroyers. Her spoiled American brother, without his customary internet hookup is bereft. Here is an eco-adventure with a juxtaposition of technologies and cultures along with the reuniting of a family divided by 90 miles of ocean and laws that have kept them apart.

Luza’s voice is Latina and lyrical. She has a familiar Cuban need to make art. Having visited Cuba three years ago, I observed this in the people and so much more about the culture which is clarified in Engle’s book. Luza makes sculptures “ . . . shapes molded from mud, trash, junk,/ all sorts of wasteful ugliness turning beautiful/ simply by contact with creative human hands,/ my fingers and palms hungry for meaning,/especially when this ordinary world makes no sense.”

Edver, like his scientist mother, thinks like a scientist. He’s smitten with wonderfully gross oddities in nature. “The wasp injects poison into a roach’s brain,/ turning the bigger insect into a zombie,/ that can be ridden like a horse/ using the antennae as reins,/ until they reach the wasp’s nest,/ where guess what, the obedient roach/ is slowly, grossly/ eaten by squirming/ larvae.” The siblings’ love of nature will draw them together, in spite of their vastly different cultures and economic status.

Edver has strict orders from Mom not to show off, eat too much, or compare American grocery stores to the meager rations that Cubans are allowed.

Luza speaks of Cuban resourcefulness—“Vanishing Wilderness?/ Appoint yourself guardian of a forest, patrol/ on your horse, carve a rifle from wood,/ frighten poachers into thinking/ you have bullets.” Or “ . . .no soap? Trade part of your rice rations with a neighbor who receives gifts from Miami.” Or “Not enough food? Grow bananas and avocados on the sidewalk.”

Luza explains “convergent evolution.” “Octopus eyes and human ones, separately developed, yet eventually/ becoming similar.” She continues, “Is that how Edver and I ended up/ so much alike/ yet also completely different?”

Edver remarks, “Time/ is so much slower/ here.” And as time goes on, he is influenced by the lyricism of Cuban culture and rainforest. “. . . so many green parrots wildly clacking from the feathery fronds of a towering palm tree!”

Oh yeah, and the siblings set into motion an eco-disaster, in their attempt to draw their mother to the island. And now they must solve the crisis or more species and habitat will vanish.