David Almond’s “The Tightrope Walkers” (Candlewick 2015) is dark, yet inviting. It 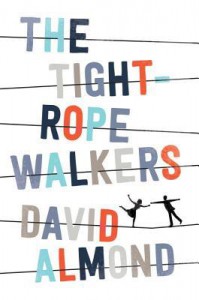 Dominic Hall grows up with a tough working-class father. Frightened for his sensitive son, the father, who welds in the shipyard, wields cruel love. He pushes his son’s face toward the fire in the kitchen grate, while hammering with the steel poker, saying, “Listen to the thunder, boy…This is what I bliddy do!” He’d like his son to do “Somethin that’s not cleanin the tanks like yer grandfather did.”

Dom’s adoring and wise mother tries to temper the father’s violence, but the father is head of the household, and he won’t back down.

The father may not want his son to be a lowly manual laborer, but when Dom tests into a fine public school, the father resents his son’s ascension toward a higher class. The father says, “They need us to build their ships and dig their coal and lick their boots and arses, but when things get tough they won’t give a thought to kickin us all back down again.”

Holly Stroud, whose father works as a draughtsman (a big step up in the shipyard from laboring) is as smart as Dom. Holly draws and sings. After seeing a small circus, the two are determined to walk the tightrope—starting with a clothesline two feet off the ground and progressing higher, and with better ropes. The metaphor draws us through the coming-of-age story, offering joy, heartache, longing, and hard falls.

But I wonder, is this what it is to be a tough boy? Dom looks at adults and wonders if they were once as bad as he is. He says, “Maybe it was the alienation common to all adolescents. But how could I know that when I was in the throes of it?” Or “Does each of us teeter in the space between the artist and the killer in ourselves?”

To great effect, Almond lists verbs that open up this world unknown to most American readers and lets us visualize his characters’ world. About the lowly tank cleaners—“The dark figures climbed, clambered, slithered, emerged and disappeared.” In a harsh winter, he is “sick of teetering, slithering, sliding, falling.”

Dom says, “Mebbe we keep on growing up until we die.” And, “We grow in order to discover ourselves. But maybe we just discover ways of hiding our selves from ourselves.” This autobiographical fiction provokes, insights tears, shocks, and delights. I’d read anything David Almond writes.