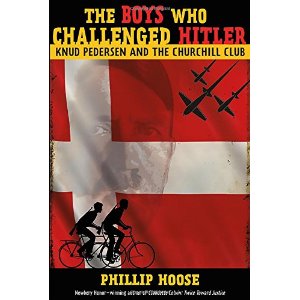 That is the history behind the remarkable “The Boys Who Challenged Hitler” (Farrar Strauss Giroux 2015) by Phillip Hoose. The author visited the Museum of Danish Resistance in Copenhagen and learned that the Resistance for Denmark evolved only late in the war—except for a group of ninth grade boys headed by Knud Pedersen, who was humiliated by Denmark’s acceptance of Nazi occupation. Knud was still alive in 2010. Hoose contacted him.

The book is comprised of Knud’s first hand account detailing his patriotic activities with a handful of classmates, interspersed with historical context, partly derived from other first hand accounts. Knud and his older brother Jens founded the “RAF” (named after the heroic British Royal Air Force) in the southern town of Odense.

The Germans marched into Odense and posted directions so that their forces could find their way around town. In broad daylight, riding bicycles, the boys of the “RAF” twisted signs so their arrows pointed in wrong directions or tore them down altogether and sped away. Next they cut telephone wires leading to German headquarters. The boys knew they could be arrested or shot if they were caught.

Their parents knew nothing of the boys’ activities, nor did the rest of their classmates. That same year, the Pedersens moved north to Aalborg where the Germans installed an important airstrip for sending bombers off to Norway. The “RAF” continued in Odense and the Pedersen brothers started “The Churchill Club” in honor of another of their heroes.

The Pedersens’ father was a pastor and the family of seven were housed at Holy Ghost Monastery. The boys attended Cathedral School where Danish children of the town leaders were educated. Knud and Jens carefully recruited a few boys at a time. Their headquarters was Jens’ bedroom on the second floor of the large medieval monastery.

The boys trained themselves to calm their nerves around the ever-present German soldiers. Breathe slowly, don’t laugh, don’t talk—unless you’re the decoy engaging the guard in a distraction. Eventually the boys would progress to arson and theft of Nazi weapons, which they hid in the monastery cellar, in preparation for battle.

Eventually the boys were discovered and arrested. Who would try them—the Danes or the Germans? Where would they be imprisoned—in Denmark or a German work camp? Even if the Danes set the punishment, the Third Reich would lean on them to ensure the sentence showed that the Germans meant business.

The teenage prisoners became stars to many Danish people, helping Denmark wake up and enact an efficient resistance against the brutal Nazis. What a great well-researched story of real teenage heroism!