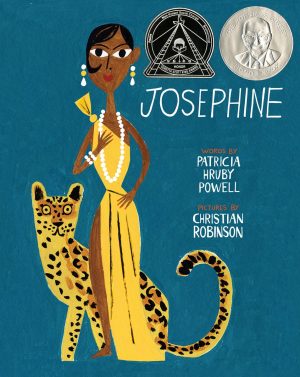 What inspired me to write Josephine?

Well, I’m a dancer. And…back in 2005, I was working  at The Urbana Free Library in the children’s department as a librarian and there was a regular group of unfocused preteen girls running pretty wild. I thought Josephine with all her pizzazz and confidence and focus, could be a wonderful role model.

And after reading Josephine I hope readers will be inspired to dream. And to do whatever they dream of doing. “Baker’s entire life spreads out in this tapestry of words.”—Publishers Weekly 11/1/13, Starred Review

“An extraordinary dancer and woman is here celebrated with style and empathy.”—Kirkus Reviews 11/1/13, Starred Review

“Powell and Robinson create a biography of a woman whose life and art are inseparable.”—Shelf Awareness for Readers 1/17/2014, Starred Review

“Factual and yet poetic… defies convention as boldly as its subject did.”— Bulletin of the Center for Children’s Books “Recommended” January 2014

“Honors the colorful exuberance of both the Jazz era and Baker’s life.”—Booklist 2/2014

Josephine: A children’s book as complex, vibrant, and endearing as Josephine Baker herself. —Cool Mom Picks

“I love how (the book) JOSEPHINE is, like the real Josephine, a rare creature.”—Richie’s Picks

“homeschooling: I could do studies off of [Josephine] for a couple of weeks easily.” —Stanley & Katrina

“an extraordinary tribute to an American legend.”—BookPage

“Powell’s text leaps of the page with energy and playfulness.”—Busy Librarian

“a stunning picture book that will entice young and old alike.”—Suzanne Morris on Kid Lit Reviews

“It’s written…as though Baker herself was singing the story.”—Buck’s County Courier Times

ALA Notable Children’s Books for “All Ages” “This is how you do a great biography, my friends.” Favorite 2014 Picture Books…So Far—Julie Danielson What Would Josephine Do?–Patricia’s guest blog on Nerdy Book Club

“Read the kind of books you want to write.”–Interview with Colby Sharp

Michelle Markel’s Cat and the Fiddle interview with Patricia

A dancer writes about a dancer—The News-Gazette

Who was your idol?—Riffle Backstory

Josephine rocks and so does her author—I.N.K.

This was a dream project–CM Cloud

A book for diverse readers and all ages

Guest blog for Angie Karcher’s Rhypibomo – Rhythm in Writing – Are you naturally musical? Who would dare search Josephine Baker to the skin?—Champaign Urbana News Gazette 1/26/14

Purchase Josephine at your independent bookstore.

Or order it at Amazon.com.