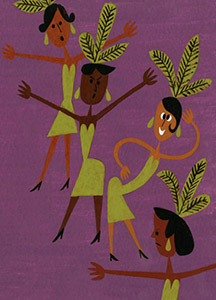 in her soul. From an early age, she was happiest when performing in front of an appreciative audience. Because of her race, she was often relegated to dressing the dancers, but Josephine worked hard and learned all the dance moves, just in case. When she got the chance to perform on stage, she took it, eventually catching the eye of a benefactor who invited her to perform in Paris, where she stepped into the spotlight and became a star across Europe. Through her bold performances and natural fearlessness she ultimately pushed through the boundaries of segregation in America to become an international performing star. The unadorned narration of the blank verse text is lovely and vibrantly read by veteran actress Lizan Mitchell. Her voice is full of the same energy and verve Josephine embodied. The text is mostly narrative and no dialog, sprinkled with occasional quotes from Josephine herself. Mitchell fluidly reads the lovely verse, “knees squeeze, now fly/arms scissors and splay,” that captures Josephine’s uninhibited nature so well. Jennifer Berberugge State Library Services Roseville MN