“All the World’s a Stage: A Novel in Five Acts” by Gretchen Woelfle (Holiday House 2011) centers around twelve year old Kit, a street urchin in 1590 London.

Kit’s first apprenticeship to a gang of thieves involves stealing purses from audience members at the Theater playhouse. That “career” ends with 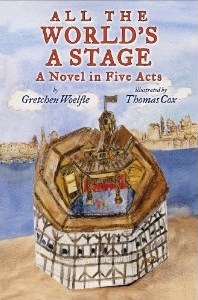 shouts of “cutpurse” and clever Molly tackling and pinning him the ground. The theater managers offer Kit the opportunity to work off his debt cleaning the grounds and eventually running errands. The resident playwright, one William Shakespeare, takes great interest in every detail he sees, including the capture of a young and spirited orphan thief–Kit.

It’s a little hard for me to believe that Kit is so reluctant to be fed in exchange for working for the Chamberlain’s Players, considering how hard life was on the street, but okay, he is. Eventually he’s bitten by the theatre bug, but what will he do? Work to become an actor? Women’s roles in Elizabethan theater are played by young men before their voices mature and deepen. Kit is still young enough that he’s eligible and he’s fascinated by acting, but there is the issue of his stage fright.

Kip, a fictional character, lives through a historic episode, when Shakespeare’s players had to dismantle their theatre, beam by beam, in secret and rebuild it across the river to escape its being demolished by the landlord. It’s a grand adventure and a perfect opportunity to learn stagecraft or woodworking. There are opportunities for a young man and Kit needs an opportunity. This device shows much about filthy stinking exciting Elizabethan London in the more specific setting of the rowdy and ribald Shakespearean theater.

Instead of chapters, the story is built in five acts, which are broken into scenes, like a Shakespearean play. In Kit’s eyes, the people behave like characters in a play, all of which furthers the meaning of the book’s title.

Way-too-fun vocabulary includes: bung – a little purse; cutpurse – the person who steals the bung; thribble – the actors’ comeback to hecklers in the audience. I invite you to throw those gems into conversation. And there are others to be found by anyone who reads the book.

What a fine book to introduce Shakespeare’s life and times.