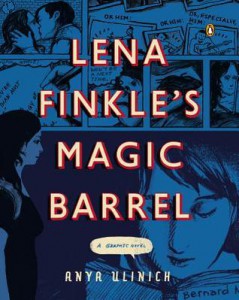 also be popular with young adults. The story of Lena, a 17 year old Russian immigrant moving with her parents to Arizona in the 80s, appears to be Ulinich’s thinly disguised memoir.

The “magic barrel” seems to be the burden of her lovers, the first being her Russian high school sweetheart Alik, who she loves “thanks to his Heathcliff schtick.” At 35, Lena is on a book tour to Russia (so was Ulinich). Alik shows up and the miniature “immigrant soul” appears and says. “Oh-Oh. The brain area that reacts to sad Russian men has been activated.” Alik, in spite of now being married to a Russian woman, suggests that he and Lena grow old together. She tells him it’s against the law in the U.S. to be old. At 35?

Ulinich gives a view of American culture seen through immigrant eyes. It is often hilarious as well as eye-opening.

With a good deal of flashback to her Russian upbringing, she informs us about the sad state of sex education during perestroika or “restructuring”—the Gorbachev years. Which sets us up for Lena’s two disastrous marriages stateside.

Upon arrival to Phoenix, Arizona, the synagogue “supports” the family by giving them “Jew Bags”—Lena’s includes size 11 green sneakers and Sylvia Plath’s “The Bell Jar”. The whole family is in effect indentured servants to U.S. families. Lena meets Chance who says, “So you’re Russian?” and she corrects him. “I’m from Russia. I’m a Jew.” She tells us only Soviets understand that. And it clarifies that cultural schism for me.

Chance calls her Anne Frank, teaches her about American culture, ridicules her, and asks why she won’t sleep with him. Answer: Because she’s serious about her virginity. No sex until she marries. So she marries Chance, gets a green card, and says “I have narrowly escaped becoming a Hasidic Wife, but that other woman whoever she is, dying of emphysema in a trailer park forty years from now—she is not me either.” They divorce.

Lena attends Arizona State and meets Josh. The complex Venn diagram and Relationship Map, showing how they’re meant for each other is hysterical. They marry have two girls and divorce (as does Ulinich). At this point Lena begins on-line dating, offers insightful, dark, funny opinions on the “gender war.” How can anyone be so honest in print (and drawing). She self-deprecates, showing herself as hideous, but she gets pretty. She loses and gains weight (in the drawings) without saying much about it.

There’s sex—not graphic or sensationalized—but honest. Even if a teen reader is (probably) not married, their parents might be and there are some fascinating insights into that institution. And love. And heartbreak. The drawings are frequently remarkable paintings. I love this book for many ages.