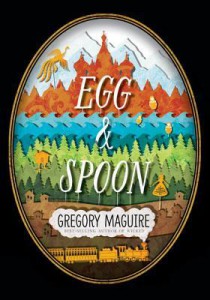 At the outset of this 1900 Russian historical fiction we follow two girls—poor Elena whose entire village is starving and Ekatarina, or Cat, an aristocratic girl. Cat with her aunt and governess travel by train to visit the Tsar in St. Petersburg, bringing him a Fabergé egg, when they are detained due to a damaged bridge. Elena asks for food. Ekatarina responds, “I can’t distribute our food. What if we run out, here in Nowhere Forest?” Cat further complains of Elena, saying her only friend is “one stiff-faced, hollow-eyed, knock-kneed skeleton in a patched skirt.” Elena’s pride forbids her from crying.

One third into the 469-page novel, the folklore kicks in.

The prisoner/narrator views the world through the eyes of birds who have visited his prison tower. He says, “Please excuse this interruption at what I hope you are finding an agreeably tense moment.” It’s hard to excuse. It might be good news that he practically writes a research paper with self-observed comments such as “…Russian sense of fate. Tragedy, comedy, and what you might call sardony, all at once.” Or when the girls switch places, he says, “Cat is trapped in a folktale she never believed in. Elena is caught in a web of wealth and luxury that seemed to her more fantastic than magic.”

But Maguire’s wisdom and beautiful turns of phrase won me over. Clever Grandmother Onna says, “What men might steal from girls, girls never miss till it’s gone.” Elena asks if Onna “was being amusing or just stewing in the vagueness of old age…” Elena’s dying Mama “descended ever more steeply into sunless caverns of sleep.” Or a great bird cries “an alarm that sounded like burning bells” and “a volley of sweeping octaves.” He refers to the “Benighted States of America.” Clever.

Witch-loving Maguire gives Baba Yaga the best zingers, calling Cat “you little pain-in-a-pinafore.” Often he takes a contemporary turn such as, “a nasty habit, like binge shopping.” Baba Yaga pulls out a salted codfish from her clothes, “a personal sachet, but the time has come to sacrifice my vanity for the sake of dinner.” And her house, Dumb Doma perched on chicken legs is a hilarious character in itself.

The story holds that we suffer global warming because the northern Dragon cannot sleep. Baba Yaga is Mother Russia. The Firebird is dying and so will Russia if something isn’t done. So the children try. That is the grand action of the last third of the book.

At a more personal level, Cat finally sees beyond herself. She has empathy for her friends and helps them. While Elena lives the luxurious life, loses empathy, before she regains it.

As Maguire says, “Live ever after, happily enough, not too happy—they were, afterall, Russian.”
Patricia Hruby Powell’s book Josephine: The Dazzling Life of Josephine Baker was chosen by the Huffington Post as the Best Picture Book Biography (artist) and is on many Best Books of the 2014, including, PBS, NPR, NYPL. talesforallages.co