“The Life and Crimes of Hoodie Rosen” (Philomel 2022) by Isaac Blum is a witty and searing story, longlisted for the National Book Award for 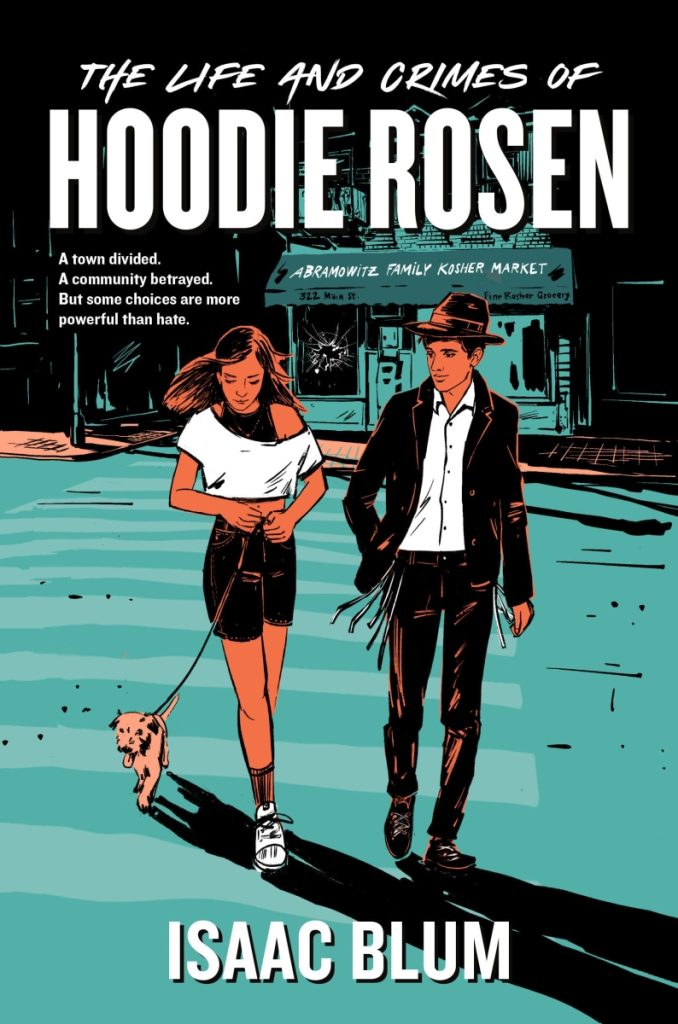 Young People’s Literature. Hoodie (short for Yehuda) is the only boy in a family of girls all belonging to an Orthodox Jewish community that has moved to the mostly non-Jewish town of Tregaron.

The young men in his yeshiva—his school—argue the moral and ethical teachings of Jewish philosophy. And in the Hoodie’s hands it’s hilarious, but still respectful and illuminating. “The Original Oral Torah plus all these commentaries make up the Talmud. It’s a giant maze of Jewish laws rules, thoughts, considerations, ruminations. Studying it…[is] basically medieval torture, but the cool, Jewish kind. It hurts so good.” Discussing Talmud is “a battle of wits, knowledge, and, in this case, wills.”

There’s this girl he sees out the window wearing, not a long white gown but a white t-shirt. And shorts, showing a lot of skin. He’s allowed to go on walks to think about Talmud, but he’s not allowed to talk to girls, especially those outside his Orthodox community.

Unable to stop himself, he asks her name. “Anna-Marie,” she says. “‘Crap,’” says Hoodie. “I’d been holding out hope she’d be a Chaya or an Esther. But no. She was an Anna-Marie. Just Anna would have provided a sliver of hope. I knew from the shorts that she wasn’t super observant, definitely not frum, like me. But unhyphenated Anna could have been a Jew at least, if a secular one . . . But Anna-Marie? There literally wasn’t a more goyishe name.” And her last name turns out to be Diaz-O’Leary.

Her mother is the mayor who wants the Orthodox Jewish community gone, and who, along with the locals, tries to keep the Jewish community from building a high rise. Hoodie says, “They talked about us like we were an invading army, like we were going to ride in on horseback with torches and pitchforks, to set their buildings on fire and slaughter them kosher-style. . . like we’re going to go home to home rounding up their bacon, confiscating their shellfish . . .”

You get it. Exclusion of the Other. And here is Hoodie falling in love with down-to-earth, hip Anna-Marie who tries to scour off the swastikas that show up on Jewish tombstones in the cemetery. His talking to Anna-Marie means Hoodie is ostracized from the community. Even his family turn away. And we love his family of sisters. His oldest, Zippy who knows the Torah better than Hoodie, but she’s just a girl who sleeps at the kitchen table after studying Talmud all day. Young Chana stations herself on the roof of the house, throwing small vegetable missiles down upon Hoodie. And there are two more younger sisters.

Tension mounts until the unthinkable occurs which shocked me but is authentic in both worldly and literary ways. What a great book! Not only did I laugh reading most every page but I learned a load about the day to day life of an Orthodox Jewish community.