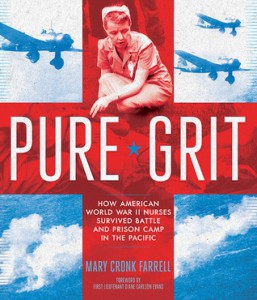 In July 1940 the U.S. and Great Britain were the only democratic powers left in the world. In contrast, U.S. army nurses “enjoyed a casual resort-like atmosphere” in the tropical paradise and fascinating culture of the Philippines. So begins “Pure Grit: How American World War II Nurses Survived Battle and Prison Camp in the Pacific” (Abrams 2014) by Mary Cronk Farrell.

Everything changed on December 7, 1941, when the Japanese bombed Pearl Harbor and then the Philippines. Untrained in combat medicine, “the women labored nonstop—staunching blood, bandaging wounds, easing agony, if possible,” becoming combat nurses overnight. The attack “demolished nearly one half the strength of America’s Far East Air Force.”

Three days later Cavite Naval Shipyard was demolished. As casualties streamed in doctors became surgeons and nurses took over doctors’ roles. They made assembly lines of tetanus vaccines for boys who’d lost limbs. Nurse Peggy Nash said, “Patients were two to three in a bed and on chairs between beds.” Doctors operated on every table, on the floor, on the steps. “There was not time for fear.”

The Japanese bombed Manila and the American medical force escaped into the jungle. WWI surgical instruments preserved in Vaseline and wrapped in 1918 newspapers were found in a warehouse supplying the makeshift hospital the Americans set up along miles of river. The jungle canopy provided roof over straw mattresses line up on the ground.

President Roosevelt promised rescue, but this was wartime and reinforcements didn’t come for years. Nurses toted river water to bathe patients, open latrines attracted flies and rats. Rations and ammo ran low. Doctors and nurses convulsed with malaria chills on the job, but they kept going. Rations were quartered. The nurses received one meal every two days supplemented by snake eggs and monkeys taken from the jungle.

The Japanese bombed the makeshift hospital, calling it an accident. Nurses evacuated first to Corregidor Island, then to an underground hospital, serving 1500 patients in a makeshift facility designed for 500. When the Japanese advanced again, Americans surrendered May 6, 1941. Now prisoners of war at Santo Tomas, they continue to nurse patients—both allies and Japanese.

The women wondered. Would they be raped? The Japanese had “raped” Nanking. They planted small gardens to supplement their miniscule rations. When they had the energy they wrote and presented plays, played musical instruments. And felt guilty. Every day more people died.

By the time of liberation, February 3, 1945, each surviving nurse weighed in at about 80 pounds. Why is this story so fascinating? Because they’re heroes? Yes, but also you wonder how you would endure it. How would you behave? Or would you even survive?

The book touches on the fact that this was a generation of under-appreciated women. Once home in America the nurses were denied disability imbursement despite serious prison-induced ailments. They were not lauded or decorated until they were old women. On that front things are improving but we still have a long way to go.