The paperboy stutters. He has difficulty uttering his own name, which begins with V— a sound difficult to make. The paperboy is known as Little Man. Not until the very end does the author, Vince 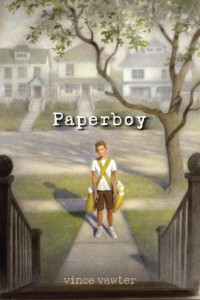 In 1959 Memphis, 11 year old Little Man has taken over the paper route of his best friend who is vacationing with cousins. Needing a tool to cut the cord of bundled papers, Little Man takes his knife to the junkman/knife sharpener, Ara T, in spite of being warned to steer clear of him. Ara T, an adult bully, will not return the boy’s knife unless he says his own name. Little Man can’t do it.

Little Man assigns new names to those difficult to say. His best friend Art becomes Rat. The protagonist uses a technique called Gentle Air, breathing an s-s-s sound in order to voice difficult-to-say words—of which there are many. The reader is shown the challenge a stuttering kid must overcome in order to speak, to read aloud in class, and how those efforts result in being teased and taunted.

His paper route customers provide relationships, which lead to Little Man’s maturity. A learned merchant marine, Mr. Spiro, calls the boy Messenger when he shows up to collect the weekly paper fee. Spiro offers pithy dollops of wisdom such as Voltaire’s: “Speech was given to man to disguise his thoughts.” Spiro gives Messenger one part of a torn and quartered dollar bill each week, with one word written on each piece. Along with the protagonist we wait to solve the mystery of the four words.

Another client is the beautiful whisky-drinking Mrs. Worthington. Our boy is infatuated and concerned about her relationship with an abusive husband. We are drawn to find out the outcome.

His closest ally is Mam, his (white) family’s (black) maid. Together, Mam and Little Man confront the dangerous Ara T, risking their lives in a seedy part of Memphis where we learn about the self-governing justice system in this African American community.

Thank heavens Little Man excels at pitching a baseball. This gives him much needed confidence and an arena in which he is highly respected.

I loved the details shown of childhood as when Vawter writes, “I ran from lamppost to lamppost without stopping like I was running the bases.” The lampposts might tag him out. (I’d have been running from tree to tree as an Indian avoiding the cavalry).

Just as the paperboy carefully chooses words according to their starting sound—such as saying story rather than book with it’s difficult b sound—Vawter carefully chooses his words. We understand when he says, “…the D sound stuck tight in my throat like a tennis ball in a chain-link fence.”

Vawter knows his setting as only one who has lived it—details such as which streets had less traffic on Saturdays. This beautiful story is clearly personal to its author, yet universal for his readers.