“Boots on the Ground: America’s War in Vietnam” (Viking 2018) by award winning 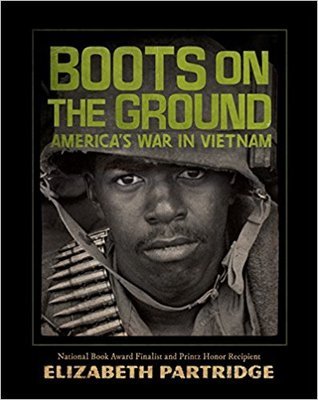 author Elizabeth Partridge is a great read for all adults—young and otherwise.

If you grew up in the 60s or 70s, you can follow the history and marvel at your junior high (elementary, high school or college) understanding of the events.

How do you organize a book about this complex politically shameful war? Partridge follows each American President—Kennedy, Johnson, Nixon, and Ford. None wanted to be the first president to lose a war. They were winners, not losers. But American and Vietnamese boys were dying by the thousands.

Interspersed throughout the President-sections are chapters following diverse selection of individuals “on the ground” or “in country.” We follow a gung-ho Hispanic foot shoulder who enlisted for a year-long stint early in U.S. involvement, 1965-1966. His aim was to leave behind gangs and drugs to get on the straight and narrow. You see him and his buddies in impossible situations, seeing friends die, getting drunk and stoned back at base to alleviate the pain of it.

A mixed-race “dirt poor” machine gunner from Selma, Henry Allen, had been a civil rights worker, a member of SNCC registering black voters—a disciple of Martin Luther King, Jr. and nonviolence. Once drafted he had to decide to shoot or disobey orders and be court-martialed.

Martin Luther King Jr. claims a powerful chapter, as “protestor” to the war, and leader of the Civil Rights Movement. Dr. King, in spite of his work with LBJ on black rights and getting the Civil Rights Act signed in 1964, followed his conscience to the monstrous dismay of LBJ. MLK said, “If I am the last, lone voice speaking for non-violence, that I will do.”

A medic is haunted by those he cannot save. A young infantryman says, “I was ready for combat, but I wasn’t ready to see people die.”

A Japanese American Green Beret is called a “gook” by fellow soldiers, and assumed to be an enemy spy by some. After his year in Vietnam he is relieved to go home but suffers the classic survival guilt. Why did I survive?

Country Joe McDonald, an early veteran of the war later became a protest singer. Largely by happenstance, filling in at the famous Woodstock Music and Peace Festival, he sang “And it’s one, two, three, What are we fighting for? Don’t ask me, I don’t give a damn, Next stop is Vietnam; And its five, six, seven, Open up the pearly gates . . .” It became an anti-war anthem.

Lily Lee Adams, an Asian-American nurse and war protester, was tricked by a recruiter to serve in Vietnam. She treated “blown up” boys, from both our side and the Viet Cong North.

There’s a chapter for a young Vietnamese refugee and her family attempting to escape the country when America pulled out in 1975 and the Communists of North Vietnam rushed in.

All these soldiers speak of the distaste with which they were met on their return home—another reason for American shame—and why it’s so important to read this award-winning book.