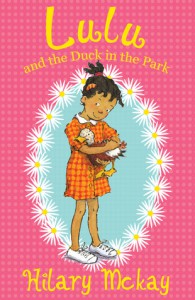 grade) book from an author who understands how to make both kids and adults laugh.

The story begins on a school field trip and moves into the classroom, making this a great read aloud in kindergarten through third grades. Especially if it happens to be spring and even more especially if you happen to be hatching eggs in your classroom.

Lulu loves to jump off swings at the highest point so she can fly for a brief moment. She loves animals—furry ones, feathery ones, stick-insect ones. Her teacher doesn’t.

Mellie loses everything. When she loses her sweater, Lulu gives hers to Mellie.

Lulu and Mellie are best friends and cousins. The book begins, “Lulu was famous for animals. Her famousness for animals was known throughout the whole neighborhood.” Sentences are simply constructed and ingenious repetition makes for humor rather than monotony.

“Every few minutes Mrs. Holiday glared over her shoulder at Lulu to make sure she knew she was still in trouble. Every few minutes Lulu looked unhappily down at the ground to show that she did.”

The book is sweetly British. The children are in Class Three, and often in a muddle. The Britishness is understandable and will give American kids a view of a slightly different school culture—but only slightly different.

On to the plot. While Class Three is eating lunch in the park, two big black dogs race through the park trampling the ducks’ nests and wreaking havoc. Lulu secretly grabs one rolling egg and keeps it warm. You can guess what happens, but McKay tells it so delightfully, it’s brand new.

At the end of the day

Mrs. Holiday is quizzing, comforting, and convincing her class to leave behind the day’s bad memory of trampled nests. We are going to move on because…? she prompts. Henry responds, “Because the ducks are all dead.” “(The ducks are not all dead).” Please, Good Teachers, read this to your class.

The prequel story, “Lulu and the Dog from the Sea,” (2011) is every bit as good. Lulu and Mellie are on holiday at the seaside with Lulu’s family. The dog catchers are after this menacing, thieving, mangy escape artist (dog). Hilary McKay takes us on a heartwarming hilarious ride to its guessable and satisfying conclusion.