Missouri 1849. Samantha, a Chinese girl, watches her father’s grocery store go up in flames. Her father 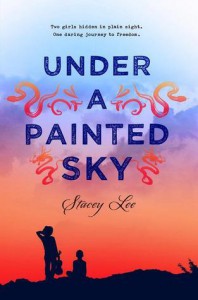 dies, trapped inside. Ty Yorkshire under the guise of helping Samantha, tries to rape her. She whacks him with a scrub brush and he’s dead. Being Chinese puts her at a disadvantage with the law, so she flees with Annamae, Yorkshire’s black slave girl.

So begins “Under a Painted Sky” (G.P. Putnam 2015) by Stacey Lee. The girls cut their hair, wrap their chests, dress as boys, become Sammy and Andy, and set out on the Overland Trail.

Sammy and Andy stow away on the last wagon of the evening being ferried across the river, headed west. They hear a conversation. The law is after a Chinese and a black girl. They know that their disguise is flimsy. Besides which, a gang of escaped slaves known for breaking the hands of their victims roams the wilderness, wanted for murder. Dangers lurk everywhere.

The “boys” soon meet three young cowboys. Cay is a handsome skirt-chaser. His brooding cousin West has rough-hewn good looks. Peety is a Mexican horse whisperer. Peety nicknames the “boys” Chinito and Andito. The “boys” trade their cooking and healing skills for the opportunity to move fast on horseback with the cowboys.

At first Sammy has to share a horse with West. She fears he will feel her female figure. Does he know or not? We wonder. A mule is eventually procured so everyone has a mount.

Besides the adventure, Sammy and Andy are getting to know each other. Andy is Christian. Sammy uses Chinese lore to identify her place in the world. For instance, one’s fate is vastly affected depending on whether one is born in the year of the Rat or the Dragon. When a storm breaks on the prairie, Sammy knows that “thunder and lightning end and here come their dawdling children, plump droplets falling from the sky,” which lends a lyrical sensuality to the story.

Sammy is a violinist and knows languages. These skills get them out of tight spots. Andy wants to find her brother who she has promised to meet at Harp Falls. But where is that? It’s not on the map.

The five overlanders battle prairie fires. Three of the five contract cholera, fights break out. But there’s also violin music and new friendship. The “boys” learn how to ride, lasso, all kinds of skills that cowboys have—things that come in handy when rescue is required. The cowboys learn languages from Sammy. That becomes helpful, too.

At first you appreciate the cowboys’ care of these seemingly younger “boys.” Then you wonder why the cowboys are so gentle with these “boys.” Do they know the truth? These cowboys don’t talk like men. They’re downright tender toward the “boys.” Sammy is falling for West. West is falling for Sammy. Gay cowboys in the 1850s? Do the cowboys know the girls’ secret? There are many reasons to turn pages—rapidly.