“Little White Duck: A Childhood in China” (Graphic Universe 2012) is the fascinating autobiography of Na Liu, illustrated as a graphic novel by her husband, award-winning artist Andrés Vera Martínez. 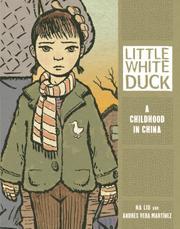 We are treated to a vision of the disappearing China of Na Liu’s childhood, which began in the city of Wuhan in 1973. In China, children are addressed by nicknames so that bad luck spirits cannot find them by their names. Na was called Qin, which means piano, until her sister came along and she became Da Qin (big piano) and her sister was Xiao Qin (little piano).

Ms. Liu’s story has elements of the mythical as she describes riding with her sister, on the back of an immense golden crane over the nighttime city. The practical is conveyed in the fact that only one child can start in pre-school—and that privilege goes to little sister Xiao Qin.

The historical is conveyed from a child’s perspective when her parents violently grieve over the death of Chairman Mao in 1976. Na Liu flashes back to her parents’ childhood, which would have been the early 50’s.  Old China is depicted in sepia-tones and tells a heart-warming story. Na’s mother contracted childhood polio. In spite of her poverty, the state funded multiple surgeries, which resulted in a cure and she became a teacher. Her father, also a poor peasant, had his education funded and he became a successful agricultural scientist.

Stories of childhood pranks show that Chinese children are not so different than children anywhere. We get a view of Chinese houses, food, Chinese New Year’s celebrations. Martínez, who has visited Wuhan annually with his Chinese family, takes us, with Na Liu, on a visit to her father’s family in a distant village. We see yet another China, so foreign, even to Na Liu.

On the occasion of that journey Martínez paints in the style of ancient Chinese landscapes where the trees limbs corkscrew and end in little puffs, just so. The beautiful Chinese calligraphy is translated into English throughout the story.

My one objection is the frequent over-the-top grimaces of the little girl characters, but this is the status quo in graphic novels. And since I’m enjoying graphic novels more all the time, perhaps I’ll learn to appreciate the extremes of emotions depicted. I love the glossary, timeline, author biography and maps. This book is a pleasure for all ages.