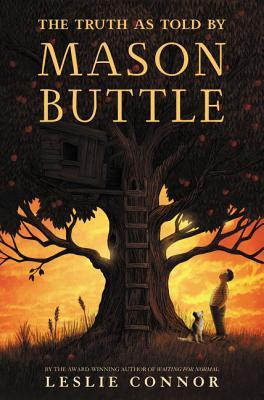 misfit. Not only is he a gigantic seventh grader, but he is sweaty beyond belief. He changes T-shirts throughout the day and mops up his forehead with paper towel and bandanas. What’s worse, his best friend Benny died mysteriously.

Mason has told the police lieutenant countless times what he experienced with Benny on that fateful day, but Lieutenant Baird keeps coming back for more information. The reader knows that Baird doesn’t believe Mason, but Mason doesn’t understand that. And people keep giving Mason that “so-sad” look. Mason can’t read or write but he does have support from the school counselor—wonderful Ms. Blinny.

Ms. Blinny gives Mason all the time he needs, a place to escape, and a computer program that lets him speak his story as it is typed out. Everyone in school should have a facility and a counselor like Ms. Blinny. Her room is a refuge for anyone who needs it.

And Mason has support from his Grandma and Uncle Drum who raise him in the “crumbledown,” their old house on the apple orchard. The family of three are grieving for Mason’s mother and the adults have lost hope. They’re having to sell off orchard land to make ends meet and developers are building houses beyond the woods and all over their sight lines.

Living in one of those new houses is Matt Drinker who bullies Mason mercilessly. But Matt has a fabulous dog, Moonie, who Mason loves and dog sits. Thank heavens Mason makes a friend in the funny wise Calvin Chumsky who moves into one of the new houses up the hill. Calvin brings out the best in Mason and the two find a hideaway on the property, just as Mason and Benny had in the woods.

Bully Matt and his crony Lance fling apples at Mason and Calvin as they all get off the school bus together. Big sweet Mason and tiny brainy Calvin are reminiscent of Steinbeck’s Lenny and George in “Of Mice and Men.” But this is wholly Mason’s story.

Whenever Lieutenant Baird comes around, Mason sees dark green fog oozing into his field of vision. When he sees green, he believes it’s bad luck following him. Grandma and Drum try to protect Mason, but they’ve given permission to let the police speak to him, feeling completely confident in his honesty. Mason sees pink when he and Calvin chalk prehistoric animals on their hideaway walls—like the ones in the Lascaux Caves in France. Seeing colors that corresponds to emotions is called synesthesia.

Should Mason tell the police about their hiding place? He swore not to. And he’s loyal, but he wonders. He tells the computer program at school, “I feel stupid. I feel dangerous. Makes me scared to be me. The way I am. Because what can you do about that. Nothing.” What happens is believable, honest, satisfying, and hopeful.

This fabulous book was a finalist for the National Book Award for Young People’s Literature. Try not to read the flap text, which gives a monstrous spoiler. Why did they do that?