“The Nazi Hunters: How a Team of Spies and Survivors Captured The World’s Most Notorious Nazi” by Neal Bascomb (Arthur A. Levine 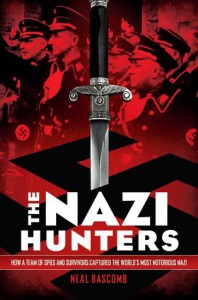 2013) starts on a dark street corner in Buenos Aires, May 1960. A man steps off a bus. “He has no idea what is waiting for him.” This nonfiction account of the Israeli capture of German Nazi Officer Adolph Eichmann reads like a thriller.

We cut to March 1944 as Nazis search for Hungarian Jews so they might continue the eradication of 750,000 Jews, ordered by Adolph Hitler. Eichmann, in charge of the “Jewish Problem,” had perfected his plan in 10 countries including Austria, Germany, and Italy. “Anyone who was physically fit was to be delivered to the labor camps for ‘destruction through work.’” Everyone else would be killed immediately.

First, Jews wore a yellow star and could not travel or practice most professions. Next, Jewish wealth, including factories, businesses, and bank accounts were taken over by Hitler’s Third Reich. Thirdly, all Jews were moved to ghettos. To complete their isolation they were taken to camps. All the while they were assured that this was done for their safety.

In July 1944, leaflets were dropped in Germany by U.S. planes demanding a halt to the persecution of Jews. Obsessed with the eradication of Jewry, Eichmann was unmoved. U.S. troupes who later liberated Jewish concentration camps were shocked and horrified by the stacks of dead bodies and the state of survivors.

Eight years after the war, near Buenos Aires, high school student Sylvia, dated “Nick” Eichmann, who bragged about his father—a high ranking German Nazi. With the help of her father she conveyed this information to a Jewish authority. But all Israeli funds were directed toward building their new country.  The trail went cold.

Some seven years later, 15 years after the war, the search takes hold and several Israeli spies volunteer to abduct Eichmann. It is, of course, illegal for one country to arrest citizens of another. The extradition process is long and usually unsuccessful.

Each Israeli team member has survived the camps and had family killed in them. They set out on different days, flying from various European cities on forged passports and visas. Equipment such as hidden cameras, sedation drugs, miniature woodworking tools, false teeth, and wigs are sent in “diplomatic pouches” which cannot be seized or searched.

The team includes a doctor, a master of disguises, a master trickster-builder-mechanic, a forger, an escape artist. Undercover, they discover Adolph and his family living in a shack outside Buenos Aires. He travels to and from his factory job each day, by bus. Months of surveillance and planning include finding a safe house to keep Eichmann before transporting him to Israel.

The Israeli airline El Al did not normally fly to Argentina, but an anniversary festival made it possible for them to bring diplomats into the country. The aircrew does not know they are part of an espionage abduction.

Tension mounts as the team rehearses the abduction. They must change safe-house due to the garrulous gardener who threatens security.

The Israelis get their man, fly him to Israel, try him, and execute him. Thrilling.