“Extra! Extra! Read all ’bout it! ‘Murder at the Waldorf. Terrible Struggle with a Crazy Man! Two Men Killed!’ Read it in “The World”! The world’s greatest newspaper. Just two cents!” This is how Maks hawks his newspapers on the fifth and final day of this fast-paced novel, “City of Orphans” by Avi (Atheneum – Richard Jackson 2011). 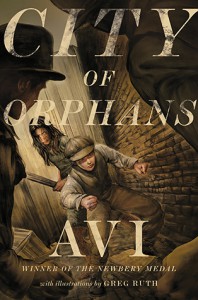 In the tenements of New York City, 1893, 13 year-old Danish immigrant Maks desperately needs his eight cent profit to help cover his family’s rent and food. Bruno, leader of the cruel Plug Ugly gang, attacks Maks and attempts to rob him. A homeless girl, Willa, defends Maks with her club. Now the gang threatens to get them both.

Maks and Willa manage to get to Maks’ home where he discovers his oldest sister, Emma, has been accused of stealing a gold watch at the glamorous new Waldorf Hotel where she works as a maid. She’s imprisoned in what they call the Tombs, awaiting trial. His parents are distraught. His mother barely comprehends what is going on in this new country.

Another sister, Agnes is coughing, due to the “wasting disease” or tuberculosis. Still, she goes to work at the shoe factory daily with her father and takes night classes so she might one day become a secretary. But now the shoe factory is threatening to close down. Maks’ three little brothers still go to school.

At this point, most readers are saying, Next to this, I have no problems. Maybe we read such books so we can put our own problems in perspective. This is the immigrant experience in late nineteenth century and Avi sets you smack dab in the center of the sounds and sights of historic New York.

Eccentric lawyer Bartleby Donck directs Maks to search for clues to his sister’s innocence. But will Bartleby, who also has the wasting disease, survive to help Maks? You start to feel you’re reading a Charles Dickens novel, which is cool.

Because this is a middle grade novel, you’re pretty sure it’s going to turn out okay, for which I am extremely grateful. You care so much for this warm tight-knit family who are trying to find freedom in America, but as Maks’ mother says, Here, more tears are shed.