One small shorebird, a rufa redknot, tagged B95 many years ago, has probably lived longer than 20 years. His history and that of all rufas is told by master storyteller Phillip Hoose in “Moonbird: a Year on the Wind 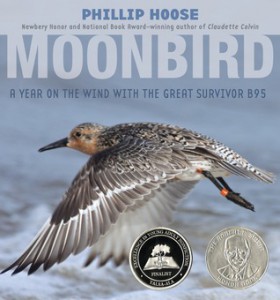 Every year B95 and his compadre rufas migrate from the southern tip of South America, Tierra del Fuego to the Canadian Arctic and back again. “But trip by trip,” Hoose informs us, “B95 threads the sky with fewer companions,” a fact attributable in large degree to human activity. “Can humans and shorebirds coexist?” 80% of rufas have disappeared in B95’s lifetime. He was first banded in 1995 when he was an adult, at least 3 or 4 years old. (The “95” happens to be his number, not the year he was banded).

Maps and photos show the yearly route, pole to pole. We know their route because scientists recapture banded birds, record data, and release them. Some rufas are fitted with tiny radios. Why do they go so far? The preliminary answer is: for food, space, and light. They breed in the Arctic where they have nearly 24 hours of summer light to find food. But when winter returns in August they head south seeking the Antarctic summer light.

They gorge themselves before they set out for flights that last 3 to 5 days—without landing. When they do land at various points along their way, they’re depleted and in dire need of food, but still far from their final destination. “…this bird has to be among the toughest 4 ounces of life in the world.” At each landing spot a particular food is available on which the tiny birds gorge. At Delaware Bay, it’s been eggs of horseshoe crabs. But that crab population has been decimated by humans—first to be ground and used as fertilizer, now as bait to catch conch, which is a cuisinary delicacy. 80% of the crab population is gone. If rufas doesn’t eat, he doesn’t survive.

Hoose builds on his premise that “plants and animals keep us alive and improve our lives.” It was discovered that horseshoe crabs whose eggs feed the rufas provide a liquid that keeps our medicines safe from bacterial contamination. Scientists have found a way to extract what they need and return the crabs to Delaware Bay.

Interspersed in the rufas’ life narrative are profiles of scientists who often began as kids with a fascination for shorebirds and who volunteered in the quest to save them. Some of the profiles focus on kids volunteering today, bringing the study to their classrooms. As an added bonus, an appendix lists how an individual or a class can help the shorebirds.

This nonfiction story keeps readers on the edge of their seats. There is the mystery of why rufas fly nine thousand miles to breed? Why don’t they just stay put? “For nearly 20 years now, B95 has followed a ripple of food and a beam of light across the globe just as his ancestors did long before.”