“Liar and Spy” by Rebecca Stead (Wendy Lamb 2012) has my vote as the next Newbery winner, the highest honor given 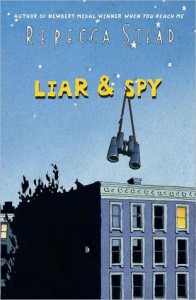 to a middle grade book. We’ll know what the committee decides nest week, January 28. I haven’t read EVERYTHING this year, so I might have missed something, but this is a great novel, as are all of Rebecca Stead’s three novels.

Georges is a seventh grader, a city kid, named after the post-impressionistic artist Georges Seurat who painted A Sunday Afternoon on the Island of La Grande Jatte in millions of colored dots. That ‘s’ at the end of Georges is enough for class bullies to call him Gorgeous, bump him in the cafeteria, and tease him mercilessly. His mother has often told him that these small incidents are each like one small dot in the Seurat painting. They don’t much matter. The big picture is made up of millions of tiny dots of color. Stand back so you can see the complete picture. In a few years everything will change. 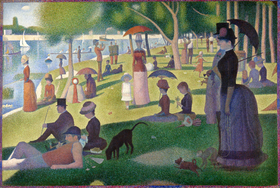 knows that both viewpoints are true—the one dot (or point) and the larger picture they create are both important. Pointillism.

Georges’ upstairs neighbor, Safer, who is homeschooled, introduces Georges to his Spy Club. Georges wonders at the boredom of having to endlessly observe (spy on) the image projected from the foyer webcam, watching for Mr. X to enter the building. Safer says, “Boredom is what happens to people who have no control over their minds.” Safer, 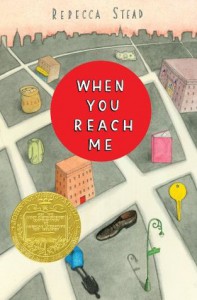 besides having an odd name, seems wise and mysterious.

Moral issues are addressed in a real way. When Georges visits the candy store, he says, “I debate the morality of eating a Starburst before the pack is paid for and decide not to.” That’s small but the issues become much larger. What about the moral ground of ‘breaking and entering’ a stranger’s apartment? 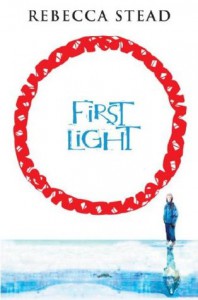 Apart from some hilarious scenes, the feel of the story is slightly dark, but it’s the dark inside a New York City apartment building. And in the end, with a twist that knocked me off the chair, in its way, brings a flashflood of light.

Read more about the Seurat painting and pointillism at http://en.wikipedia.org/wiki/A_Sunday_Afternoon_on_the_Island_of_La_Grande_Jatte