“Call Me Athena: Girl From Detroit” (Andrews McMeel 2021) by Colby Cedar Smith is a novel-in-verse based on the immigration experience of the author’s 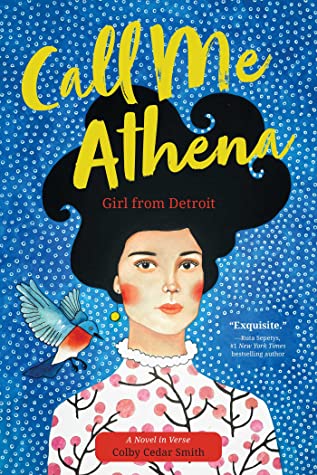 Mary, in Depression era Detroit, is the first narrator. At sixteen she is horrified by her parents’ plan—an arranged marriage with an older man. Mary’s twin Marguerite has no such restriction on her life. But in her parents’ eyes, Mary must be protected from her independent nature. Her wild behavior entails wanting to work in the family store. A working girl? Scandalous in her Greek American father’s estimation.

When Mary laments her upcoming marriage and expects suppoort, her sister says, “It can’t stay the same forever./ Even if/ we wish it could.” Mary says, “I feel like someone/ has thrown a stone/ into the heavens/ and smashed the stars./ We are falling/ from the sky.” Smith’s lyricism is intoxicating.

When returning a shovel to the cellar, Mary finds a packet of dusty love letters written by a woman who calls herself Petit Oiseau (Little Bird) and a man who calls himself Loup (Wolf). The lovers live in France during World War I. Readers eventually realize that Petit Oiseau is the second narrator, Jeanne, who comes from a wealthy French family. Jeanne is serving as a nurse in her village in 1918 when a wounded American, Giorgos, is admitted.

Giorgos (who we guess is Loup), the third narrator, had stolen a lamb back home in Greece to feed his sick, dying sister. He fled the repercussions, immigrated to America and was immediately drafted into WWI. The patchwork of voices is beginning to come together.

At school Mary hears a survivor of the Ford Massacre of 1932—the prior year, say: “We held signs that read/ Give us Work/ We want Bread Not Crumbs/ Tax the Rich and Feed the Poor/ As we got closer/ to the plant/ Ford’s hired goons/ attacked us./ Tear gas, fire hoses,/ clubs./ Men running everywhere/ trying to escape/ the bullets/ pelting the crowd./A boy was shot/ Blood spread across his chest/ like a car dripping oil/ onto the pavement.” The presenter, a war veteran, protested at Henry Ford’s factory. The workers want health care and an end to racial discrimination.

This is not only pertinent to our lives today but to the violence of Giorgos’ and Jeanne’s lives in war-torn Europe. Giorgos describes the horrors of the battlefield. Jeanne nurses wounded soldiers and when a boy dies, she writes home to their parents. On the positive side, war tends to equalize people’s class and status. Jeanne is rich. Giorgos is poor—and a foreigner. The unlikely pair marry and move to Detroit.

Eventually, in Detroit in 33, Mary’s parents allow her to work in the store—baby steps for her rights as a woman are made by necessity. Mary goes on a secret date with a young man. Life is indeed changing, as it must. Somewhere along the way the reader unravels the puzzle to realize who Jeanne and Giorgos are to Mary.

Patricia Hruby Powell is the author of the award-winning Lift As You Climb; Josephine; Loving vs Virginia; and Struttin’ With Some Barbecue all signed and for sale at Jane Addams bookstore.  Books forthcoming about women suffrage, Martha Graham, Joe Ernst. talesforallages.com