“Hey, Kiddo” (Graphix/Scholastic 2018) is a graphic novel and a memoir by author/illustrator Jarrett J. Krosoczka. 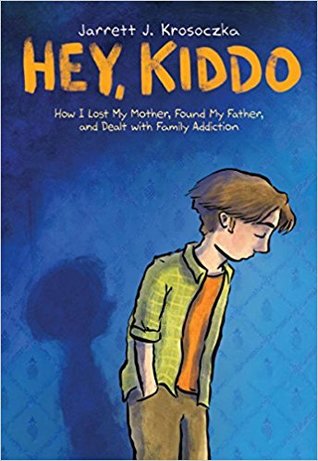 Its subtitle, “How I Lost My Mother, Found My Father, and Dealt with Family Addiction,” is a pithy description of this important, page-turning book.

Jarrett was raised by his grandparents who drank heavily and smoked constantly. But they loved him dearly. His absent mother, a heroin addict, wrote him heart-felt notes and occasionally showed up for visits, but always missed the big moments, like his graduation, in spite of her promises.

His working-class grandparents raised five of their own children, the younger ones overlapping Jarrett’s time with them. The grandparents scraped together money to send their grandson to comic-making classes.

One of the more poignant scenes has Jarrett not notifying his grandparents of his eighth grade graduation ceremony. Of course they discover this and are understandably crushed. When his young aunt, Holly, expresses her concern, thirteen-year-old Jarrett rectifies the matter, feels deep shame, and the entire family attends the ceremony. Clearly the whole family—barring his mother and father—was raising the kid.

The author’s unwavering honesty is what gives this story its depth—along with the unusually accurate cartoon depictions of the entire “cast.” The renderings of Jarrett at all his various ages, up to about eighteen, are remarkable. There are photos of his grandparents as part of Krosoczka’s Ted Talk linked to his website, studiojjk.com, and his renderings of them are right on. But even before I saw the photos of his grandparents, I knew from Jarrett’s cartoons exactly what they looked like.

The author outlines how art saved him. He says, “When I was a kid, I’d draw to get attention from my family. In junior high, I drew to impress my friends. But now I draw to survive.”

He tells us that his mother started using when she was 13. Krosoczka heard the stories. “She’d walk into a store with a trash bag, fill it with batteries, and then run out of the store—selling the batteries on the black market to fuel her addiction.” She stole from Joe and Shirl, her parents and Jarrett’s grandparents. She even stole her mother’s diamond ring, and sold it to feed her habit. She’s a mess.

In his early years, Krosoczka never considers his biological father—doesn’t even know his name. But in his teen years, that changes. Jarrett finds him and now he has a relationship with him.

It’s a heart breaking story, yet sweet and uplifting, because Krosockzka finds his way.

This book was a Finalist for the National Book Award for Young Readers. Wow!